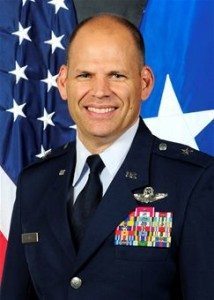 Brigadier General James Vechery is a loving husband and a devoted father of three who serves in the United States Air Force.  Born and raised in Maryland. Jim attended the University of Maryland where he graduated and was commissioned in the Air Force in 1988.  A pilot by trade, Jim, known to many as “Vech”, has a background as a T-37 Instructor Pilot at Undergraduate Pilot Training, and also flew the C-5 Galaxy, KC-135 Stratotanker, and C-37.  Brigadier General Vechery commanded the 912th Air Refueling Squadron at Grand Forks Air Force Base, North Dakota; 22d Air Refueling Wing at McConnell Air Force Base in Kansas, and the 60th Air Mobility Wing at Travis Air Force Base, California.