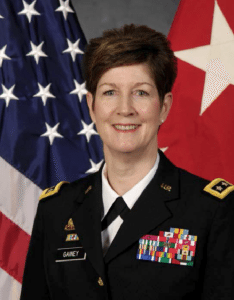 Lt. Gen. Gainey received her commission as a second lieutenant through ROTC in 1978, after graduating from Old Dominion University in Norfolk, Va., with a Bachelor of Science degree in Special Education.

In 1987, she attended Babson College, Wellesley, Mass., to complete her MBA in Contract Management and Procurement. In July 1989, she attended the Army Command and General Staff College, Fort Leavenworth, Kan., and she is a 1997 graduate of the Army War College.