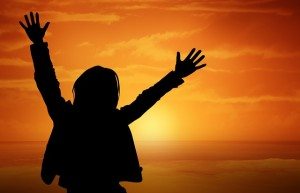 Richard Branson’s first business venture was a mail-order company started with funding accumulated by handing out leaflets outside of concerts. A 15-year old Bill Gates ditched school in Seattle to develop a traffic-measurement program called Traf-O-Data, netting $20k for himself and fellow student, Paul Allen. Colonel Jimmy Doolittle led 80-men in sixteen B-25 bombers to barely leave the deck of the USS Hornet on a Tokyo raid in 1942, when landing—even return—was tenuous, at best. And a little girl took on a wicked witch and saved all of Oz, despite the efforts of a self-doubting lion. A common thread binding these four stories can be summed up in one word: courage.

Much has been written on the topic of courage as it applies to leadership. The ability to persevere in the face of negative consequences is, after all, foundational to leadership discussions about risk taking, responsibility, bold action and facing challenges. The inverse of courage, “Submission to Fear,” leads to avoidance, hiding and pretending the risk is not there. The result of this path is regret: “I wish I would have done something…” or “I could have started something great.” As you may have guessed, the difference between ending up in the history books and an unremarkable life is the level of courage you choose to pursue and the amount of fear you choose to overcome.

Personal courage and your ability to face what you fear can be daunting—especially if the personal choice to be courageous is not popular. Your credibility and your brand—in some cases, your honor—is built upon the level of courage you choose to enact. The same is true whether you are on the battlefield trail, the yellow-brick road, or on the path to the C-suite: courage is a choice made under stress. Such choices have never been easy.

In 1948, Richard and Maurice McDonald completely closed a boomingly successful restaurant in San Bernadino, CA. They did so based on educated-intuition that they could serve their customers even better, but only if they shut their doors to revamp their entire operation. After firing the carhops, shuttering the doors and ripping up the kitchen, the two brothers mechanized their food preparation operation. The streamlined the process with the end-goal of producing quality food in record speeds and affordable prices…and they succeeded. Their courageous move reaped amazing success, allowing them to expand—selling 21 franchises and nine outlets across Southern California.

Enter 52-year old Ray Kroc—who had been selling Multimixers to the McDonalds brothers so they could churn out shakes for their increasingly hungry crowd. In 1954, he traveled to San Bernardino to see why the brothers had been ordering so many shake-mixers and had an epiphany. What started out as a conversation with the McDonalds brothers about opening up more restaurants so he, himself, could sell more Multimixers ended up with a signed contract to begin rolling out the franchise nationwide. When he returned to Chicago, Ray leveraged his credit and his credibility to found the Franchise Realty Corporation and opened the first McDonald’s restaurant in Des Plaines, IL. The McDonald’s Corporation was chartered in 1960, and Ray bought the full-rights from the McDonald brothers for $2.7M. Today, McDonald’s is selling hamburgers to over 46 million people a day from over 34,000 stores around the world in 121 countries and is a marketing symbol known by everybody.

Both the McDonald’s brothers and Ray Kroc displayed courage, but their results were dramatically different. The level of success experienced by each can be derived from the level of risk each was willing to take, and the boldness of vision each was inspired to follow. In “Courage in Leadership: From the Battlefield to the Boardroom,” Peter Voyer outlines the corporate context of the “Four Pillars of Leadership” as Loyalty, Knowledge, Integrity and Courage. The latter being the lynchpin of effective leadership. In Peter’s words, courage is “having the strength of character to persist and hold on to ideas in the face of opposition.” The McDonald’s brothers displayed visionary courage and followed their informed intuition to make an uncomfortable choice in closing their doors—what was born revolutionized their business. Ray Kroc displayed leadership courage through his obsession with the potential of the brand—what was born revolutionized the restaurant industry.

In “Courage as a Skill,” Kathleen Reardon describes business courage as a “special kind of calculated risk taking. People who become good leaders have a greater than average willingness to make bold moves, but they strengthen their chances of success…through careful deliberation and preparation.” What Kathleen describes is what few of us recognize: courage doesn’t have to be an innate trait of human performance. It is a skill that can be learned through repeated interaction, learning and leaning into our own discomfort. As with any learning, our success is determined by the goals we set, the level of commitment to growth we display, and our willingness to learn from our mistakes and try again.

Each of us has the ability to find within ourselves a motivation and a drive which can compel us to face adversity and grow through an obstacle. While your courageous moment may not be taking a hill on a battlefield or breaking into the hamburger business, you face obstacles daily which provide you with the ability to test, learn and re-apply the lessons you require to stretch your courage in new directions. As Susan Tardanico writes in “10 Traits of Courageous Leaders,” demonstrating leadership courage can be scary. However, this is exactly the point. “…it’s precisely the kind of behavior that fosters trust and sets a crucial example for others to follow at a time when they’d rather hunker down and wait for the storm to pass.” The example you set, for yourself, your team, your family and your community may be exactly what it takes to conquer the next fear, hamburger or wicked witch that stands in your way.

Your yellow-brick road is waiting!

Matthew T. Fritz is a leader and mentor in the field of complex organizational change, emotional intelligence, and organization strategy. A successful DoD senior-acquisition program manager and test leader, Matt has earned documented success in the areas of test and evaluation, assessment, technology development and flight operations. He has specialized experience in cost, schedule and performance management and is an active duty Field-Grade Officer with command-experience in the United States Air Force. Matt is also a certified acquisition professional, as well as a certified Emotional Intelligence Trainer/Practitioner. He is the Author of an instructional book entitled, “Leveraging Your LinkedIn Profile for Success” and actively blogs with other military leaders at GeneralLeadership.com, as well as his personal blog at AdvancedVectors.com.
Tags: Branson, courage, example, fear, fritz, Inspiration, Kroc, Leadership, life, McDonalds, perserverence, Reardon, Tardanico