Perfection Found in a Fighter Debrief 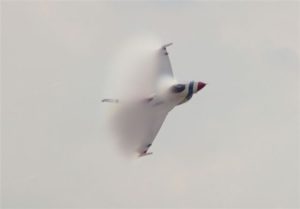 As leaders, whether in combat or a Fortune 500 company, we strive for something that can never be achieved: Perfection. While flawless execution and perfection is likely impossible, it’s the pursuit of perfection that will get you closer to achieving it. With that fact in our mind, we struggle every day in our determination to achieve it.

So, how can we close the gap between our actual execution and our planned, perfect execution? The answer can be found in the halls of any Fighter Squadron.

Our Air Force is, hands down, the best in the world. Have you ever wondered how military leaders ensure the continued success of our nation’s fighting force? How does our military routinely take a young college graduate and turn them into a precision-focused supersonic Fighter Pilot? The answer is found in a simple, scalable, repeatable experiential learning accelerator known as The Debrief which reveals Lessons Learned.

This question was on my mind as I drove to my office in the sky one gloomy summer day. With a storm bearing down on the Gulf Coast, the sky was overcast and rain fell intermittently as I strapped into my McDonnell Douglas F-15C Eagle. As I ascended through rain and clouds, I emerged into a beautiful sunlit sky. A quick look in my rearview mirror revealed the storm falling further behind me. The many people below were heading to work under a sky that promised a wet and dreary day, but for me, the weather was amazingly beautiful in my office.

As I leveled my F-15C Eagle at 50,000 feet, a familiar view materialized. Instead of the normal sight distance which is limited to the environment directly around you on the ground, I could see multiple states – from the point where Mississippi kisses Alabama in the West, to the southward curve of Florida where Tallahassee turns to Gainesville in the East. The rain and wind that beset my early commute was a typical, small thunderstorm over Panama City, Florida, but it was below me now. The climb continued, the air clearing into a crisp, clear summer day. My eyes glided to the ends of the Earth. From my office I, can see her curvature, one of the sights that has always amazed me and to which I will never grow accustomed.

As my focus came back to the cockpit of my Eagle, I made a quick scan of her 350 dials and switches and thought about the clarity of this place. What most people see on the surface is limited. Limited in scope, limited in size and limited in distance. They take what their eyes reveal as the limitations of their world, never experiencing the vastness I see from above. At this point, I realized my followership had been developed in a similar fashion; an epiphany at 50,000 feet. For the first time, I was cognizant of what it meant to be a follower, a part of something bigger than myself and how an organization, leaders and followers all interweaved to empower success.

As I looked across the horizon, it seemed you could almost touch the layers of the atmosphere, each carrying its own distinct color. The view into space was the most amazing sight. Even in the middle of a summer day, the sky began to blacken and stars became visible. I felt as if my fighter jet was on the brink of space, and as if my professional evolution was on the brink of success. I was inspired on this simple, routine day to examine every aspect of military leadership development and the criticality of each individual aspect.

I felt the connection between the infinity of wonder lying just outside the protective atmosphere of our planet and the same limitless potential within each of us in our personal and professional development. After that flight, I began a concentrated effort to examine the details of what it meant to be a leader, follower and teammate, a pilot, instructor and evaluator. The answer is counterintuitive to what most of us have been taught over the years. Like a good magic trick, our focus has been drawn to a distractive path of study and predisposition while the true key to success was evolving in front of us with each action we take, we are modifying our future path. We must realize, in essence, our today is the result of the experiences, actions and decisions we made yesterday. While our today should be the culmination of the lessons learned in the past, it too often is the result of passive learning in the form of situations experienced instead with no personal or process improvement made. Why do we not take more time to truly understand lessons learned as fighter pilots do? The secret to success is Lessons Learned!

Today is the result of  the
experiences, actions, reactions and decisions made yesterday

As a new wingman in a Fighter Squadron, your primary duties are to become the best combat pilot possible. Ironically, your daily goal as a fledgling pilot is simply to survive. Survive one more flight, one more fight, one more debrief. This is the training and education which routinely yields the most capable aviators in the world is done through a deliberate process, clarified for the business world in a book I reread recently by James D. Murphy titled Flawless Execution. As he stated, “fighter pilots live and breathe the word ‘execution’. It’s life at Mach One— fast, and in many ways thrilling, but absolutely unforgiving.” How do they routinely sense and see things other people do not? Through one simple, scalable, repeatable action: The Debrief.

Life at Mach One—
fast, and in many ways thrilling, but absolutely unforgiving.

What is magical about the debrief that permits both evolutionary and revolutionary positive change? It is a process, an experiential learning accelerator, which increases the asset of experience. Murphy reveals that the power of the debrief resides in the actions of identifying problems and “accelerates the spread of the resulting solutions” through Lessons Learned. As a critical thinker, you are probably wondering why this ‘magical’ experiential learning has not spread beyond the fighter world. Harvard Business Review published to the business world that they should “Debrief every mission to review lessons learned and reinforce training.” A quick search of the internet reveals another profession which knows the power of the debrief: Surgeons. The American Journal of Surgery reveals that “changes in surgical training have decreased opportunities for experiential learning…[ and as a result ] a need exists to enhance surgical training through regular structured debriefing” A thorough debrief, simply, can reduce your time to insight. If done correctly, it will accelerate learning and increase experience beyond the mere time spent performing the actions being debriefed. The Journal of Human Factors and Ergonomics Society  revealed teams that debriefed routinely outperformed those that did not by more than 25%. Also revealed through their study, Do Team and Individual Debriefs Enhance Performance? A Meta-Analysis, debriefs are most effective when properly structured, facilitated and properly aligned.

If Fighter Pilots and surgeons devote time to learn from their actions, how can your business afford not to do the same?  The Debrief, and the resulting Lessons Learned, allow fighter pilots from the widest variety of backgrounds and countless cultures to attain a level of execution most would think impossible. The two high-speed secrets of fighter pilot expertise are, in essence, two simple-process concepts which allow them to systematically unlock the skills they need to excel: the Debrief and the resulting Lessons Learned.