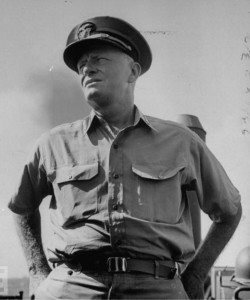 If being a leader means anything, it means taking charge and executing the responsibility others gave you.

For leadership to be authentic, we have to make decisions and take risks. The reason we’re hired into a position of leadership is to do just that; and if we’re too timid to use the authority our boss gives us then we’re not doing our jobs. In the military as in many professions, we strive to solve problems at the lowest level. “Delegating up” to the senior leaders in any organization is a sure-fire way to create organizational paralysis, but the responsibility to ensure decisions get made at the appropriate level fall on senior and junior leaders alike.

Senior leaders have to fight the urge to solve all the team’s problems for them. It’s tempting, because senior leaders didn’t rise to their lofty positions in the organization by sitting on their hands and letting others do the work. Senior leaders got their positions of leadership by, well, leading. However, once a leader passes into the senior/executive level, he or she takes on a different role. As they taught us at the Eisenhower School, “What got you here isn’t going to make you successful here,” which of course means senior leaders must learn new skills to compliment the ones that made them a successful leader at lower levels. For example, they can’t be involved in all–or even most–of the tactical decisions in the organization. Senior leaders have to have their eyes on the horizon, and be thinking several moves ahead.

When I was a new officer, I worked in an organization with a very “hands on” commander. In fact, he made every decision of consequence in the unit. It didn’t take long before morale and productivity ground to a halt. First line and mid-level leaders became unwilling to make many decisions, and the Airmen and civil service employees in the unit lost respect for them because of it. The people actually digging holes and turning wrenches couldn’t see and didn’t know about the dynamic between the commander and his direct reports—they only saw their leaders seemingly unable to make simple decisions to support them in their work. It took years to undo the damage done to that unit by a single micro-manager.

Additionally, senior leaders have to be grooming people in the organization to take their place some day. As we say in the Air Force, everybody gets a pink slip eventually. People move on, they retire, they find other work or the company moves in new directions. No employment–even with the government–is a lifetime contract. If we truly care about the people we lead and the mission of the organization where we work, we’ll make certain we’ve prepared qualified people to take our places at the appropriate time. Sometimes that commitment to allowing subordinates some wiggle room for decision-making comes at a cost.

As a commander in a deployed Middle Eastern locale, we used leased vehicles to get us around the base. When it came time to swap vehicles at the end of the lease, one of my young Airmen came to me and asked if I had any preferences for color or style for the replacement vehicle, to which I replied, “Just get me something similar to what we’ve got now.” At the end of the day, he excitedly came back to tell me he’d gotten a “great vehicle” and had even already switched out the military radios and lights for me. “Come see! It’s a cool color, too!” When I followed him outside, I saw the black Toyota Landcruiser in my parking spot with the unit insignia on the door. Black. In a country where the summer temps top 120 degrees Fahrenheit. I could’ve criticized his choices, but not if I wanted to grow a leader–I’d given him responsibility and little parameters to work with and he’d done his best. To criticize his work would’ve stifled his willingness to lead, so I thanked him and sent him on his way.

If you’re a leader–then step up and lead. Don’t delegate your responsibility to your boss. If you’re a senior leader, then lead at your level–avoid the temptation to get involved in everything. Authority is a blunt instrument: use it wisely!