Lessons on Tossing Out the Rule Book 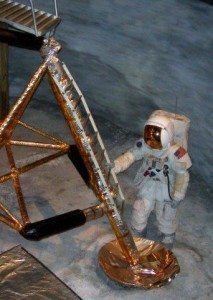 “Houston, we have a problem!”

These five words, originally spoken over forty years ago by astronaut Jack Swigert of Apollo 13 on April 14, 1970, immediately captured the attention of citizens the world over.

The warning to the Houston Space Center of a major technical fault in the electrical system of one of the spacecraft’s oxygen tanks certainly caused well founded concern. It also immediately sent technicians and scientists into a full-fledged search for innovative solutions to this unexpected life-threatening situation.

For the next seventy-two hours, scores of people worked around the clock to determine what could be done to bring the astronauts safely home.  Creativity meters soared, innovative ideas were explored, and no possible remedy was ignored.  And, as lead flight director of Mission Control, Gene Kranz made abundantly clear to everyone involved, though failure was a possibility, it “just wasn’t an option.”

The ensuing effort was far more than a contest of athletic, technological, or engineering prowess.  This was something different.  It was more of a high-stakes drama of solution-finding played out with limited resources against unknown odds.  It was also a moment in which the only real hope of turning things around demanded that everyone involved jettison their old ways of thinking.  The well-rehearsed routines, the existing “book answers,” and the standard “way we’ve always done things,” weren’t going to be sufficient to save Apollo 13.

With the realization that rote answers would no longer suffice, something magical happened. Everyone involved found themselves liberated to dig deep within their imaginations to find a creative means to shape a desirable end. The entrepreneurial spirit of the amazingly innovative and empowering effort that ensued set off a chain reaction that elevated personal performance. All of which was brilliantly exemplified in Kranz’s charge to the team to “…forget the flight plan.  From this moment on we are improvising a new mission.  How do we get our men home?”

And home they did get them.

On 17 April, 1970, three days after that now famous call for assistance, millions across the globe watched as Apollo 13 and its crew splashed down safely into the Indian Ocean. Their rescue providing the world with one of the most powerful demonstrations of solution-finding ever recorded. A reminder of how we often experience our highest creativity when there is the most at stake and failure is a possibility but not an option.

Stories like Apollo 13 encourage and inspire us by reflecting humanity at its best. They remind us effective innovation is rarely a function of stringently pursuing a particular ideal but rather, is a byproduct of remaining open to the art of the possible. While idealists and dreamers stubbornly go down with the ship, innovators have the foresight to grab the rudder and change course. As Amazon.com founder Jeff Bezos likes to point out, “People who are right a lot of the time are the same people who change their minds a lot of the time,” especially when the facts prove them wrong or their circumstances demand a change of direction.

Here’s the good news. You don’t have to be an astronaut, engineer, serial entrepreneur, or find yourself smack in the middle of a crisis to initiate the innovation process. You just have to believe there is a better way. Perhaps best of all, you don’t even have to be the one who comes up with the better way. You just have to recognize that your greatest seemingly insurmountable challenges often contain the seeds of your most significant innovations.

With this in mind, here are several lessons from the events of Apollo 13 we can apply in our own surroundings to become the kind of innovative leaders we want to be and others deserve to see.

Leverage a Crisis to Promote Out-of the-box Thinking:  The instant the moon no longer became the goal, everything the team faced, both in space and on the ground, posed a new challenge and presented a new opportunity. It forced people to set aside their entrenched opinions and ideas. It demanded they reevaluate their options and question everything they were doing. At the same time it forced them to redefine success. It was only when business as usual was ruled out that real progress toward a viable solution commenced.

Don’t be too Quick to Cut and Run:  When things don’t go according to plan, the automatic reflex is to find ways to bail out rather than stay put and try to turn things around for the better. This intuitive response is understandable given that change is hard.  Unfortunately, life has a way of teaching us if we cut and run too early, we will almost certainly miss the opportunity to bring our greatest creativity to bear on a situation. Think about it. From the moment everyone associated with Apollo 13 recognized thinking differently about both the problem and the solution was to bring the astronauts safely home, everything became a possibility.  Once “out of bound” options and previously untenable alternatives suddenly become permissible solutions, innovation flourished and success was transformed from a desirable possibility into a tangible reality.

Refuse to Blindly Guard the Past: The only way a leader and the team can overcome their natural tendency to protect the past at the cost of the future is to find ways to identify and release the gifted innovators in their midst. For example, once the flight director of Mission Control encouraged those around him to toss out the rule book, people figured out ways to transfer energy from the coffee maker to help power the self-contained lunar module—which itself was transformed into the main duty cabin; round holes were transformed to accommodate square plugs to keep the carbon-monoxide buffers working; and power from non-critical instruments and systems was rerouted so it could be stored for the spacecraft to reenter earth’s atmosphere. All of which, mind you, proved essential to the safe return of three brave American astronauts to earth seventy-two hours after hearing that memorable phrase, “Houston, we have a problem.”

Believe Adversity Creates Opportunity to Unleash the Best in Anyone:  As the events of Apollo 13 confirm, unexpected circumstances create unprecedented opportunity for anyone and everyone to elevate their game and demonstrate their value. Once people quit primarily looking to those with formal titles, specific positions, and particular roles for a remedy, ingenuity increased, creativity skyrocketed, and nothing was deemed outside consideration as a possible option.  And as a result, the seemingly impossible became possible. Proof positive how our greatest insurmountable problems often contain the seeds of our most significant innovations.

What I hope you take away from this story is that none of the positive effects of the people’s actions were realized by fearing change. Instead, each of them was the result of leveraging an opportunity for people to risk stepping out of their comfort zones to make different, more empowering choices. A lesson we should all remember the next time we find ourselves in a situation where much is at stake and failure is a possibility—but not an option.

Co-Founder & Senior Curator at GeneralLeadership.com
John E. Michel is a widely recognized expert in culture, strategy & individual and organizational change. An accomplished unconventional leader and proven status quo buster, he has successfully led several multi-billion dollar transformation efforts and his award-winning work has been featured in a wide variety of articles and journals, including the Harvard Business Review. In addition to serving our nation as an active duty General Officer in the United States Air Force, John enjoys helping people learn to walk differently in the world so they can become the best version of themselves possible. He is blessed to be married to the most patient person on the planet and together, they have two amazing sons. You are encouraged to learn more about John at his website, www.MediocreMe.com
- Contact John Michel via email ( JohnMichel@GeneralLeadership.com)
- Military Biography
Tags: Adversity, Apollo 13, Best, Crisis, Difficult, failure, Gene Kranz, john michel, Lesson, leverage, Option