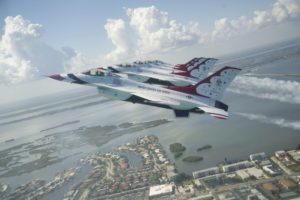 The secret of happiness is:
find something more important
than you are and
dedicate your life to it.

The U.S.A.F. Thunderbirds move in unison, seemingly thinking and acting as one…at over 1,000 miles-per-hour. Their actions and thoughts must be precisely aligned. This team, with 50% turnover each year, has built the ultimate repeatable process for aligning its team, for developing a shared mental model of precision.

Recently, I had the opportunity to sit with the C-Suiter’s of a highly-successful $7B business. The topic of discussion: The Questionable Future of the Company. Why? They were internationally recognized as an entrepreneurial giant, noted for their “Pirate” mentality consistently causing beneficial market disruption which yielded revolutionary advancements.

The discussion began with standard four questions and incredibly positive answers…with a shocking #5.

Q2: Are the people doing the right thing?
A2: Yes.

Q3: Are they intrinsically motivated?
A3: Yes, extremely.

Q4: Do they finish what they start?
A4: Yes, usually before planned completion date.

Let us Turn to the U.S.A.F. military for an example. The United States Air Demonstration Squadron, more commonly known as the Thunderbirds, are an amazing assemblance of talent. The Thunderbirds are assembled to showcase the U.S. Air Force, the capability of Airmen and the power of our military. Little known is the fact all Thunderbirds undergo a specified period of indoctrination before earning the “right” to wear the suit. Each member shows daily at the Red, White and Blue “office” before the sun rises. As a team of “newbies,” they enter the majestic Thunderbird hanger, with pristine white painted floors and a glowing oversized patch emerging from the center. In a choreographed ceremony the public will never see, they don booties with rags and polish and, on hands and knees, spend the opening hours of the day polishing the patch emblazoned in the floor and discuss the weight of being a Thunderbird. From the 300,000 Airmen they are privileged to represent to the millions of Airmen who have forged the path to where our Air Force and the Thunderbird Team are today, from the first airshow to the last, they understand every ounce of history, of dedication, of reason, of purpose behind the patch. This develops a pride of ownership for the future of the Team and the Air Force. Once the new group completes the syllabus of belonging, once the other team members are convinced they have adopted the shared mental model, only then are they considered for “patching.” Attention to detail such as this is what allows them to align, as the pristine jets in the photograph depict, with extreme precision.

This example leads to Q5…

Q5: What are we missing?
A5: A Shared Mental Model.

After discussion, it became obvious why the stock prices had fallen and there was concern for the future. The company had the right people, doing the right things, all intrinsically motivated to complete projects ahead of schedule. But they were all running in different directions. The “problem” with brilliant innovators, same as Fighter Pilots, is that when they are not given a clear vector on which to act, do not have a shared mental model of what the future and success should look like, they will develop their own path.

Mental Model:
“Beliefs, ideas, images, and verbal descriptions that we consciously or unconsciously form from our experiences and which (when formed) guide our thoughts and actions within narrow channels. These representations of perceived reality explain cause and effect to us, and lead us to expect certain results, give meaning to events, and predispose us to behave in certain ways.”

A quick turn to popular literature reveals “the idea is that team performance improves if team members have a shared understanding of the task that is to be performed and of the involved team work.”

Harvard Business Review details not only the importance of a shared mental model but also the three critical components:

As our situation in the C-Suite continues, the manager of the top performing sales team offered to me on a coffee break how he planned to reward his team when they hit 330% of their sales goal for this quarter. As he continued, he detailed how his team broke the record every quarter because they, collectively, thought the “low” quarterly sales goal was laughable and they rallied around the shared mental model of tripling the goal every quarter. This was not delivered with arrogance, but with confidence in the capability of his unique part of the team.

After returning to the formal discussions, new questions ensued from the coffee break chat. With representatives from every aspect of the business, Question #6 was, simply, what is your High Definition Destination?

(*EDITOR’S NOTE: For more information on the concept of “High Definition Destination”, please reference “Afterburner Seminars” via this link.)

This was the “Ah-Ha” moment.

To be successful as a team, as a company, your innovators, workhorses and intellectual capital MUST be moving in the same direction, gaining team buy-in and driving effects-based thinking, to achieve your stated and shared Mission Objective. With the simple adoption of the sale managers mentality, this $7B company is now forecasting to grow over $10B in the next 2 years. The confidence in achieving their clear mission objectives, which supports their High Definition Destination was found in uniting the team around the intrinsic motivation always present, just left unfocused until now.

For me, the “Ah-Ha” moment was a repeat of a lesson learned so many times before…if you are interested in instigating a leadership resolution, do it one leader, one company, one employee at a time and find the shared mental model which unites individual and corporate vision, motivation and success.