Sustaining High Performance In Your Teams 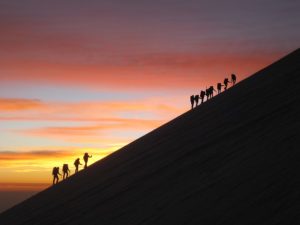 “Performance is your reality. Forget everything else.”  Harold S. Green

You’re a leader of a team and you’ve invested a lot of time working through the kinks that come with making the members play nice together in the sandbox.  Not only are they playing nice together, they’re collaborating and supporting each other in solving problems and delivering results.  It’s every leader’s dream to have a high performing team and you’re living it.

Now the challenge is to keep the team’s performance at this level.  To do this, let’s start with team dynamics basics.  For most, this means going back to the stages of group development first proposed by Bruce Tuckman:  Forming – Storming – Norming – Performing.  Depending on the organization and the team’s task, evolving through these four steps can be arduous, especially if a shared vision doesn’t exist or the organization’s culture isn’t the type that embraces teamwork.  Or the transition from forming to performing can be instantaneous, as in the case of emergency response personnel responding to an accident or soldiers under fire.

The Four Stages of Team Development

Back in 1965 Bruce Tuckman first proposed the four stages of team development that have become a staple component of leadership and management courses.  Knowing what these four stages are is the first step in generating high performance in a team.

Step #1 – Forming.  The team meets and learns about the opportunities and challenges, and then agrees on goals and begins to tackle the tasks.  Members still operate as individuals and are likely uniformed about the team’s issues.  This is the stage where everyone plays nice and assess the other team members for who they are, what they are, and how the team will function.  It’s here that the leader has the opportunity to (1) establish a model of the behaviors they want to see in the team and (2) sets team and individual expectations; (3) begins establishing a team culture; and (4) states their vision for the team, as well as the goals and tasks the team must undertake.

Step 2 – Storming.  Here is where teams can come off the rails and it takes a leader with a steady hand and good interpersonal skills to keep it together.  In this stage, participants form their opinions about the character and integrity of team members, and feel compelled to voice their opinions or take actions to undermine, or not support, the other members of the team.  Left unchecked, the team will be less than effective at accomplishing its tasks and, in the worse case, can even become a detriment to the organization.

During this stage, the leader must work to keep the interpersonal conflict “healthy”.  This doesn’t mean stopping conflict from happening.  On the contrary, you want this to occur in order to get all of the issues in the light so you the team members can work out their differences and so you can assess your team members’ ability to get along.

By squashing conflict, you (1) lose the ability to figure out if you have a team member who will keep the team from progressing along the team development path; or (2) take away your team member’s need to size-up their teammates and work through any issues they may have.  The key thing to remember in facilitating the storming stage forward to the norming stage is to keep the conflict professional and issue-based, not person-based.

Step 3 – Norming.  In this stage, team members realize that they are in “it” together and there’s a shared history now, resulting from working through the disagreements and evolving to cooperation.  If there is competition, it’s focused externally or structure in such a way to bring out the best in each member of the team.  The team begins to establish and grow it’s own culture and the leader’s work in establishing a vision and goals comes to fruition – the team uses these as the target towards which their combined efforts are focused.

Arriving at this stage, one may be content to stay.  But to achieve a high performing team, a leader must continue their efforts to make the vision and goals shared by each member of the team.  In fact, you want the vision and goals to be more than just “shared” – you want each team member to own the vision and the goals as if they were their own.  When this begins to happen, the team progresses forward to the performing stage.

Stage 4 – Performing.  It’s in this stage that the team begins generating success.  Solid work towards established goals, knocking out key tasks, and doing both with collaboration and creativity.  Disagreements still occur and depending on the culture of the team these disagreements may still be highly dynamic.  Overall, however, the members of the team are motivated and knowledgeable of what must be done.  They are at this point because the members share a common vision and own the team’s goals as their personal mission.

It’s in this stage that leadership nirvana is reached – you have a team that is operating at a peak level and delivering results contributing towards the goals and vision you established way back when the team first formed.  Awesome.

Now your job is to keep the team operating in the performing stage, which isn’t a necessary given.  Current team members will leave, new team members will join, and goals or projects will be completed requiring new goals and new projects. Sustaining a team at high performance requires the leader to understand these three things:

Regardless what you may believe and regardless of the expectations you may harbor (or are placed on you) no one can deliver 100% effort, 100% of the time. Every successful leader knows this and compensates for it building in downtime.  Like high performance sports teams or military units, they know that building in rest and relaxation – or R&R – is essential to maintaining consistent success.  Not doing so leads to burnout and significantly decreases effectiveness while increasing the likelihood of failure.

If we view performance as a sine curve (bear with me…I’m an engineerJ), there are three primary levels of performance we need to be aware of:  maintaining, succeeding, and receding. 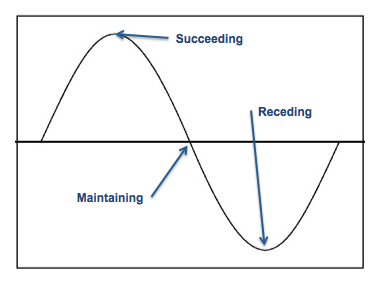 Maintaining entails doing the basics necessary to subsist and to simply get by.  Succeeding occurs when goal achievement is occurring, creativity is abundant, and the right stuff is getting done.  This is what everyone labels as “high performance” – the individual or the team area on fire.  Opposite to succeeding phase is the receding phase.  This occurs when the proverbial wall is hit – performance drops off, motivation is sapped and the general desire to deliver the goods and make things happen goes out the window.

While it’s relatively easy to see when an individual or team is squarely in each of the three levels of performance it’s not as easy to discern when a shift from one level to another is about to occur without paying attention to the environment around and within the team.  One can most often sense when a shift is about to take place based on the attitudes, language and posture of team members.

The best way to cultivate the skills of performance perception is to pay attention to the environment and your feelings about the quality of work that is being produced by your team.  You know when they’re is on fire and when they’re not.  Learn how to assess the team’s performance and you’ll know when they’re beginning to lose the edge, the point when they need to throttle back.

Nature follows cycles, the universe does, and so does a teams performance.  Understanding this simple fact can help you lead your team through the slumps quickly and back to high performance in short order.