Trajectory: The Importance of Knowing Where We Are Going 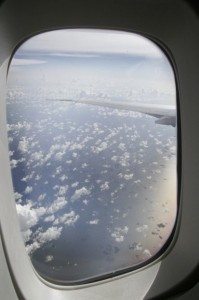 Its 9:45am at Chicago’s O’Hare International Terminal as American Airlines Flight 1693 hums patiently at Gate K18 on the snow-covered ramp as passengers take their seats.  In seat 27E of the Boeing 737-800 sits 8-year old Jim Nelson—excited and eager for his first airplane flight.  His parents have done a great job keeping the destination a secret as they place their bags in the overhead compartment and smile knowingly to one another while buckling up on either side of him.  Further forward in seat 10C is Evelyn McNair sitting nervously next to her boyfriend, Patrick, who is just as nervous…but for different reasons.  They are enroute to a work conference in Orlando—but Patrick secretly plans to propose to Evelyn at the Gate to Walt Disney World the following evening in an impromptu escape from networking at the nearby convention center.  In seat 3E, reclining near the bulkhead and glancing impatiently at his watch, sits Disney Imagineer and weary road-warrior, Matt Cotaldo, who is travelling…again…from his homebase in Los Angeles to check on the installation of a new ride his team has designed.  Up in the front of the plane finishing coffee in the cockpit sits First Officer, Bill Dornier, busily going over last minute systems checks and cycling between the map and the flight plan as he compares waypoints in the Flight Management System.  While the aircraft door closes and the flight-attendants complete their pre-takeoff checks, Captain Monty Frenzell pipes over the loudspeaker to welcome everybody aboard, “American Airlines Flight 1693, service from Chicago O’Hare to sunny Orlando, Florida.  We’ll be climbing up to 35,000 feet as we head South through Southern Indiana and dodge some weather over Atlanta toward the coast and down to Orlando, where the temperature upon landing at 1:50pm will be 83 degrees.  On a side note…Walt Disney World will be open until midnight tonight!”  Somewhere from the back of the plane near the 27th row, a small voice can be heard exclaiming, “Woo-hoo!”

In the story above, the characters were on a journey; however, each of them had varying degrees of knowledge about the details.  If they bought the ticket, they had a pretty good idea of where they were heading and why.  Some had plans once they got there, while some were merely along for the ride.  Those who weren’t completely “in-the-know” may have experienced mixed emotions somewhere along the way: “Why am I getting up so early for this?”  “It’s cold outside, do I have to go?” “I hope I’m not late—what time will we get there?”  It wasn’t until that single, clarifying moment when the Captain came over the loudspeaker that each passenger was gelled behind a common knowledge of where, when and how.

And so it goes with organizations striving to progress from the “As Is” to the “To Be”…struggling to align the goal with the motivation, the vision to the plan.  Herein lies the true value of communication, ensuring each teammate shares the experience of knowing where they are going.  In Leadership from A to Z, James O’Toole shared that you, as the leader, must “…communicate clearly and repeatedly the organization’s vision…all with the intent of helping every person involved understand what work needs to be done and why, and what part the individual plays in the overall effort.” As the leader, you hold the cue-card and are artist-in-charge of painting a vivid picture that both inspires and clarifies the destination.  Here are some simple tips to ensure you keep the destination in clear view:

File Your Flight Plan: As the leader, you might have a very clear idea of where you want to take your team.  At the same time, another set of eyes may alert you to some turbulence along the way that can easily be avoided by a simple course-correction.  A wise leader and friend once shared with me to avoid marking charts with an indelible pen—rather, sketch the proposed course in pencil and be prepared to share a thorough explanation from origination to destination.  Your teammates will be happy to play a role in deconflicting the route of travel.

Illuminate the “Fasten Seatbelt” Sign: Clearly communicate it is time to go, but don’t forget to remind your team what it will look like when you get there.  In fact, a few updates along the way may be just what it takes to clear the air when a cloud of frustration obscures the view out front.  The ride can sometimes be uncomfortable, but regular updates help to keep the destination in mind, the motivation soaring, and the ride worth taking.

Cleared for Takeoff: You’ve done your homework and throttled-up for the ride ahead of you and your team.  This is not the time to sit back and enjoy the ride.  Since all hands are involved in making the journey happen, it is important that each member can articulate the course as clearly as you can.  Challenge your teammates to brief the plan and recall the vision they have internalized of what the “To-Be” will look like when they get there.  It’s not forced buy-in..it’s renewed motivation!  The result will ensure everybody is aligned on a stable glidepath for successful landing at the same destination.

Not every journey you take with your team will be to a tropical destination with a nearby amusement park.  Sometimes it’s across the street, while other times you’ll be heading to the moon and stars beyond.  Regardless of your destination, you have a responsibility to communicate the vision – to ensure everyone onboard your team has the privilege of knowing where they are going.  Doing so will provide feedback on the plan, ensure everyone is prepared, and align everyone on the same runway with the ability to communicate the same trajectory.  It might even elicit the occasional, “Woo-hoo!” from a teammate whom you haven’t heard from before.

This article was orginally published
20Feb2014 by our friends on SwitchandShift.com

Matthew T. Fritz is a leader and mentor in the field of complex organizational change, emotional intelligence, and organization strategy. A successful DoD senior-acquisition program manager and test leader, Matt has earned documented success in the areas of test and evaluation, assessment, technology development and flight operations. He has specialized experience in cost, schedule and performance management and is an active duty Field-Grade Officer with command-experience in the United States Air Force. Matt is also a certified acquisition professional, as well as a certified Emotional Intelligence Trainer/Practitioner. He is the Author of an instructional book entitled, “Leveraging Your LinkedIn Profile for Success” and actively blogs with other military leaders at GeneralLeadership.com, as well as his personal blog at AdvancedVectors.com.
Tags: airlines, american, communicating, disney, fritz, Planning, sharing, strategy, trajectory, Vision