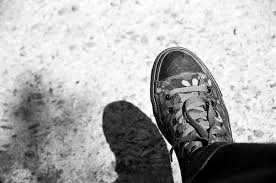 The journey of a thousand miles begins with one step.
Lao Tzu

Recently, my sweetie and I were out at Creve Coeur Lake in St. Louis County, Missouri.

There’s a paved path almost 4 miles long circling the lake and on any given day people are either walking, running, biking or blading on the path.  At overlapping times, a large group of geese cross multiple sections of the same path, making their way between an adjacent meadow where they chill out, and the lake where they swim and fish.  Occasionally – okay, regularly – they inconveniently leave droppings right in the middle of the path.

As we walked around the lake on this beautiful Saturday morning, something occurred to us.  We had been alternating between walking with our heads down (necessitated by the “gifts” the local wildlife had lovingly placed on the trail) and walking with our heads up, looking further down the trail both at the beautiful view of the trees and lake, and to make sure we could see oncoming bicyclists, runners and other obstacles on the path.  Being careful not to “step in anything,” we started talking about successfully reaching our goals while navigating around both seen and unseen hazards.  To us on this morning, success was a brisk walk around the lake in under one hour and finishing our lap with clean shoes.

Navigating parts of the walking path covered with goose poop, we had to pay attention to what was right in front of us so we wouldn’t “step in it.”  Simultaneously, we had to look down the trail a little farther at both the upcoming scenery and developing obstacles so we could achieve what we set out to do.  What we both noticed was when our heads were down, we walked much slower.  But, when we looked up, our pace quickened and we walked with purpose toward our goal.

Although this revelation isn’t earth-shattering, it did occur to us that this same scenario is true in many aspects of life.  When we’re busy “looking down” and being aware of where we are in the moment, we aren’t necessarily being driven to achieve our goals.  However, when we raise our head and look ahead toward the horizon and whatever lies beyond, we can focus and keep moving forward with purpose.  Generally speaking, we all require a balance of these efforts to be successful and grow.

So the moral of the story is two-fold.  If you never look down and only focus on where you’re going without being mindful of where you are, you’ll inevitably step in goose poop.  And if you constantly look down to enjoy the moment, analyzing every step of the way to be safe and minimize risk, you might miss some of the finer points in life and inevitably fail to achieve your goals or develop your vision.  Finally, as my Dad used to say, “How badly you mess up sometimes isn’t as important as how well you recover.”   So, if you “step in it,” admit fault, take responsibility for your actions and behaviors, and learn from the lesson so you don’t do it again.  While you’re at it, pay it forward by sharing your experience with others so they can succeed in the same fashion you do – that’s what leaders do.

As a footnote, we were actually developing this metaphor for an article my sweetheart needed to write for her company’s leadership blog.  As we walked and talked about the idea, I looked over at her for just a second and accidentally stepped in goose poop myself.  So, I found the nearest puddle, sloshed around in the shallow water a little bit then found some grass to knock the treasure off the bottom of my shoe.  Success!  4 miles in under an hour with clean shoes at the end!

Much like life, we found ourselves adjusting course to circumvent obstacles on this beautiful day while at the same time adjusting pace to reach our goals.

David E. Spector retired from active duty as a Chief Master Sergeant in the U.S. Air Force after 30 Years of honorable service. Prior to his retirement, he was the Senior Enlisted Advisor (Command Chief Master Sergeant) to the Commander, Air Mobility Command, Headquartered at Scott Air Force Base, Illinois. He served as principal advisor to the Commander and staff on all matters relating to the morale, welfare, quality of life, training, discipline, effective utilization, professional development, and force structure for 114,000 total force enlisted Airmen assigned to all corners of the globe.

David’s service began as an aircraft mechanic on C-5 and C-141 aircraft. After just two short years in the Air Force, he cross-trained to become a Flight Engineer and subsequently flew over 6,800 flying hours in a span of 20 years on multi-engine cargo, VIP and aerial refueling (tanker) aircraft including 8 years with the Presidential Support unit at Andrews AFB, MD. After being selected for Chief, David served thousands of Airmen of all ranks from Airmen Basics to 4-star Generals at two wings, a numbered Air Force and finally culminating at the Major Command (MAJCOM) level.

Immediately following retirement from the United States Air Force, he accepted employment with Omega Air, a privately owned company providing commercial inflight refueling services on contract to the Department of Defense. Hired to manage the logistics of the company’s fleet of aircraft and oversee support and maintenance personnel, David was responsible for leading several high performing teams while creating and developing a myriad of special programs to improve the company’s efficiencies.