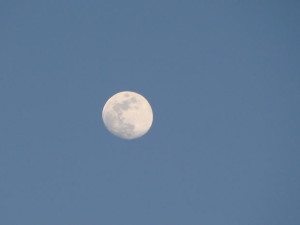 I am, indeed, a king, because I know how to rule myself.
Pietro Aretino

Long ago there lived an island king overflowing with pride who, one sleepless night, got it into his head that he would like to touch the moon.

The next morning the king called his chief carpenter into the royal court.

“I want you to build me a tower,” he commanded. “One tall enough to reach the moon.”

The carpenter’s stomach jumped and his eyes bulged.

The carpenter left the royal court and called a meeting with all the other carpenters. They talked, scratched their heads, and decided his majesty must have been joking. So they built nothing at all.

A few days passed by and the king summoned the chief carpenter back to the royal court.

“But your majesty, the carpenter cried, “you can’t be serious. A tower to the moon? It’s too hard. We don’t know how.”

“I don’t care how you do it, but I want it done and done quickly” the king demanded. “You have three days. If by that time I have not touched the moon, you cannot begin to imagine all the horrible things I’ll do to you.”

The shaken carpenter ran out of the royal court and again, convened a meeting with his carpenter friends. The assembled carpenters scratched their heads, drew some lines on paper, and racked their brains for an answer. Finally, they came up with a plan.

The chief carpenter quickly went back to the king.

“We have an idea that just might work,” he said. “But we’ll need every box in the kingdom.”

The king sent out a royal decree that every box in the kingdom be carried to the palace. The people brought them in every shape and size—crates and chests and cases and cartons, shoe boxes, hat boxes, flower boxes, even bread boxes.

Then the carpenter ordered that all the boxes be piled one on top of the other, until there wasn’t a single box left. But the tower was still not high enough to reach the moon.

“We’ll have to make more,” he told the king.

So another royal decree was issued. His majesty ordered that every tree on the island be chopped down and the timber brought to the palace. The carpenters made more boxes, adding them to the ever-growing tower.

“I think its high enough,” the king announced.

The carpenters looked up nervously.

“Perhaps I should go first…,” the chief carpenter suggested. “…Just to be on the safe side.”

“Don’t be silly!” the king barked. “This was my idea. I will be the first one to touch the moon. The honor belongs to me.”

He started to climb. Higher and higher he mounted. He left the birds far below, and broke through the clouds. When he got to the top, he stretched out his arms—but he was just barely short!  A few more inches and he would be able to bask in the glory of being the first to touch the moon! Or at least that’s the way it looked to him.

The carpenters just shook their heads. They had already gathered every box and used every piece of wood in the Kingdom.

“We don’t have anymore!” they yelled at the top of their lungs. “No more boxes! You’ll have to come down now sire.”

The king stamped his foot and jumped up and down. The whole tower trembled.

Then his majesty, confident he knew more than anyone else about building towers to the moon, had his brilliant idea.

“Listen here,” he called. “I know what to do. Take the first box from the bottom and bring it to the top.”

The carpenters stared at each other in disbelief.

“You fools!” the king yelled. “You’re wasting my time! Take the first box and bring it up now!”

“This is a very stubborn and prideful king,” the chief carpenter said, “I suppose we must obey his command.”

So they pulled out the bottom box.

You don’t need to be told the rest of the story.

Who reading this has not been exposed to a leader who, much like the self-oriented, box-stacking king, has fallen prey to the pitfalls brought about by excessive pride? Who hasn’t experienced a leader whose inaccurate or incomplete view of themselves led them, in the words of 17th century philosopher Spinoza, to think “more highly of oneself than is just”?

The mere fact you are reading these thoughts on how to improve your leadership abilities likely means you, too, possess a decent-sized ego. And that’s perfectly okay. After all, a healthy, vibrant, and balanced sense of self-confidence is essential to being an effective leader.

The problem arises, however, when our ego consistently gets the better of us and begins to distort our perspective of who we are, what we are capable of, and the role others play in both our success and failure. When this occurs, our inflated view of self begins to subtly expose us to a host of cognitive distortions from illusory superiority to egocentrism, confirmation bias, and overconfidence phenomenon. All of which, mind you, exist to make us think more highly of ourselves than is just.

Fortunately, guarding ourselves from falling prey to this dizzying array of mind tricks and going the path of the pride-filled box stacking king is easier than it may seem. It begins by being proactive in keeping our innate self-serving biases in check by putting into practice three no-fail self-leadership safeguards:

Don’t Avoid Looking in the Mirror: The most effective leaders make it a priority to conduct a periodic self-evaluation. They are open to taking a hard look in the mirror and acknowledging their mistakes and limitations. As importantly, they are open to new ideas, encourage respectful dissent, and strive to maintain a realistic perspective of their proper place in the world.

Don’t Underestimate Your Blind Spots:  Cognitive scienceconfirms how prideful we are informs how we rate ourselves, how we deal with our accomplishments and failures, and ultimately forms our assessment of our current abilities. Successful leaders understand exaggerating their faults is as every bit as damaging as thinking too highly of themselves. The key to maintaining a healthy and balanced ego is to be honest about our strengths, aware of our shortcomings, and humble enough to face the truth about both.

Don’t Become Overly infatuated With Your Own Agenda: Research studies show we all possess the natural tendency to construct and reconstruct our opinions, memories and self-worth relative to others in order to flatter ourselves. In other words, pride is our default setting. Preventing ourselves from distorting the raw data of reality so we can fuel our desire to believe we are better than we actually are demands we guard from becoming so fixated on our own agenda that we pursue our goals and objectives at all costs.

Every effective leader understands consistently making better decisions, taking prudent actions and achieving noteworthy outcomes is a collective endeavor–not a solo proposition. In a “look at me” self-promotional oriented culture, however, it is easy to lose sight of this timeless truth. Don’t let that be you. Resolve to guard yourself from thinking more highly of yourself than is just by being open about your fears, honest about your failures, and aware of your blind spots.

Make it a priority to avoid building your own tower to the moon so you won’t meet the same sad fate as the pride-fueled, box-stacking king.

Co-Founder & Senior Curator at GeneralLeadership.com
John E. Michel is a widely recognized expert in culture, strategy & individual and organizational change. An accomplished unconventional leader and proven status quo buster, he has successfully led several multi-billion dollar transformation efforts and his award-winning work has been featured in a wide variety of articles and journals, including the Harvard Business Review. In addition to serving our nation as an active duty General Officer in the United States Air Force, John enjoys helping people learn to walk differently in the world so they can become the best version of themselves possible. He is blessed to be married to the most patient person on the planet and together, they have two amazing sons. You are encouraged to learn more about John at his website, www.MediocreMe.com
- Contact John Michel via email ( [email protected])
- Military Biography
Tags: agenda, balance, blind, confidence, distortion, ego, evaluation, michel, mirror, perspective, pride, self, truth, understand, view