Why Biased Leaders Are Deaf, Dumb and Blind Followers 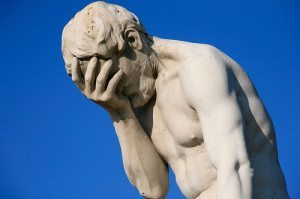 “The eye sees only what the mind is prepared to comprehend.”
Robertson Davies

Reality is affected and shaped by biases – which are distortions of reality.

The realities that we must deal with are often created from distortions. This is analogous to our getting caught up in a revolving door on a winding day.

Once we get sucked into bias based thinking, acting and reacting we keep going round and round instead of advancing forward.

Here’s an example of how bias thinking can create a reality which we can then go on to judge and in doing so – become convinced that we are victims of a situation rather than the co-creators responsible for it coming about in the first place.

A Study in Biased Behaviors

Recently I led a group of 30 executives in an issue processing and problem solving exercise. The goal was three-fold.

The declared and agreed upon issue was communication. The focus was an issued mandate. The chief obstruction to resolving the concern was determined to be a lack of communication protocol. Judgments flew. Conclusions were hurled. Reactions escalated. Accusations like missiles clashed and exploded in mid-air. Outlooks became heated. Temperatures rose. Quickly the group became divided.

The junior portion of the executive team confessed to feeling victims of poor internal communication. They complained that the top-down ineffective communication went on to hamper their performance, their teams functioning and that of their direct reports.

The junior group banded together in their righteous cause to accuse and blame the senior members of the team for creating a trickle down stream of ineffective communication, making the junior crew look bad and out of the loop to those reporting up to them.

“The issue then morphed into fear. Not communication. Fear of asking.”

The tipping point came through one question. I asked the junior executive group what role they felt their collective biases played in this situation. The junior group admitted to being afraid to ask the tough clarifying questions they needed to, to gain more needed clarity from the senior team.

The issue then morphed into fear. Not communication. Fear of asking. Fear of being seen as ignorant. Fear of being thought of as needy. Fear by the junior team of being perceived as less mature, less seasoned, and less experienced than the more high-ranking, reliable and perceived to be, self-sufficient part of the executive team.

The “aha” came in the facilitation when the junior group understood that far from being the victims of the ineffective communication they thought they were suffering from – they were in fact, the perpetrators of it. That honesty pivoted the group.

The junior group now understood that it was their biased thinking that perpetuated the confusion.

Once the junior group conceded this fact, admitted to their role, saw themselves as the part of the problem rather than the victims of it – the walls of separation between the junior and senior executive teams collapsed. The bricks of separation cemented by biased thinking now crumbled and fell down. Seeing the commonality of bias on both sides, all came together renewed to create the communication protocol that was needed in the first place.

The emotional bias of fear was the issue behind the choked communication. Not the protocol, as previously thought. The lack of communication protocol was the effect. Not the cause of the concern and issue.

The emotions of the junior group created the biases, which clouded their judgment, which resulted in their decisions to externalize the blame and focus it out onto the senior team, which in turn then created a reality for the junior team as being victimized by those they projected the problem onto.

“Reality is affected and shaped by biases – which distort and warp reality.”

As said in the opening of this post, we judge based on outcomes.

We judge ourselves and others based on our and their outcomes.

Our outcomes are in turn, judged by those around us.

Reality is affected and shaped by biases – which distort and warp reality.

Once we get caught up and sucked up into bias based thinking, acting and reacting – we loop rather than advance forward from issues to resolutions, into better and professional and personally profitable outcomes.

Here’s 12 simple take-a-ways to help leaders guard against getting sucked into biased judgments;

Leaders that follow their biases are deaf, dumb and blind followers – not real leaders.