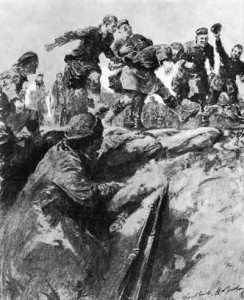 Act as if what you do makes a difference. It does.
William James

In the early months of the First World War millions of servicemen, believing this would be a quick war, rushed from all over the continent to join in the fight. By December of 1914, most realized they had been wrong. This war was far from over. So each side dug miles and miles of trenches across the French countryside with often, only 60 yards separating the combatants. This area between the trenches became known as “no-man’s land.”

As Christmas day neared, soldiers on both sides began receiving gift boxes containing food and tobacco prepared by their governments. The leaders in Germany sent small Christmas trees and candles to troops at the front. Even Pope Benedict XV intervened, proposing a Christmas cease-fire. Yet his proposal was rejected by both sides as ‘impossible.’

Or so everyone thought.

On Christmas Eve, German soldiers unexpectedly set their trees on the trench parapets and lit Christmas candles. They then began singing carols. Though their language was strange, the tune they sang was quite familiar even to their enemies across the dreaded “no man’s land.”

In a matter of minutes, the British decided to join in. Shortly thereafter, soldiers on both sides started raising signboards up and down the trenches with the most oft-repeated German message being: ‘YOU NO FIGHT, WE NO FIGHT.’ Some British units responded by posting their improvised ‘MERRY CHRISTMAS’ banners.

As time ticked by, more and more placards popped up. A spontaneous truce resulted. Soldiers from both sides willfully left their trenches, meeting in the middle of ‘no-man’s land’ to shake hands. They even exchanged gifts of chocolate cake, cognac, postcards, newspapers, and tobacco.

By Christmas morning, “no man’s land” had become “every man’s land” as the space between the trenches was filled with fraternizing soldiers, sharing rations and gifts, singing and taking the time to honor their fallen comrades. After some time, a game of soccer was started using improvised balls. It was reported the Germans won with a score of 3-2.

As the day progressed, men continued to exchange gifts and buttons and soldiers who had been barbers in civilian life provided free haircuts. One German, a juggler and a showman, even gave an impromptu performance of his routine in the center of ‘no-man’s land.’ As the sun prepared to set that Christmas day, commanders on both sides found their troops hesitant to return to their positions and had to order their men to their respective trench under penalty of court martial.

The German and British soldiers reluctantly parted. In the words of Pvt. Percy Jones of the Westminster Brigade, “with much hand-shaking and mutual goodwill,” the two sides went their own ways.

After the impromptu cease fire, German and Allied commanders tried to cover up what had happened. Some generals felt this unauthorized spontaneous truce was treasonous behavior. Even many years after peace interrupted the war, French generals still couldn’t fathom why their soldiers deliberately disobeyed orders and joined the German enemy on the silenced battlefields for a forbidden Christmas truce; unable to understand what could move men to climb out of their trenches, put down their weapons and embrace their enemies, if even for a moment.

As the story of the French and German soldiers and their unexpected Christmas truce affirms, when we choose to make the most of our current situation, we gain courage and confidence to stand up for what we believe in. When we pause to do something nice for someone, be it friend or foe, we show we can change the world. Maybe not the whole world, but their world.

So I offer the next time your difficult circumstances try to lull you to take cover in the safety of your own proverbial trench, remember the Battlefield Miracle of 1914. Choose to be a force for good in your surroundings. Risk reaching out in some meaningful way to those around you.

4. Be a connector. Introduce friends or colleagues, on line or in person, to others with shared interests.

5. Commit to living each moment with enthusiasm.

7. Forgive someone who doesn’t deserve it.

8. Always think, speak and act in a loving manner.

9. Treat everyone with the same level of respect you’d give to your mother.

10. Ask someone for their opinion or advice.

11. Generously spread praise. Repeat something nice you heard about someone else.

12. Help someone get active. There’s a coworker or acquaintance in your life who wants to get healthy, but needs a helping hand. Offer to go to the gym together.

As you will notice, none of these suggestions are complicated; none of them cost money; and none of them matter if you are serving in a war zone or are safely settled at home. They are all small, simple ways to apply the same lesson learned from those courageous soldiers who defied the status quo and facilitated the Battlefield truce of 1914. Namely, never underestimate the power of small acts of kindness and consideration to transform “no man’s land” into “every man’s land.”

Choose to act as if what you do makes a difference. It does.

From our WHOLE Team here at GeneralLeadership.com – We Wish You A Merry Christmas & All The Goodness You Have Earned for 2014!

Thank you for sharing a remarkable year with us–from our launch to the wonderful subscribership we enjoy together with you today.  To put it simply–we are very blessed!  We hope you will continue to grow with us and enjoy the new offerings we have in store next year.  The journey thus far has been great–the future promises greatness for all of us.  Cheers to you and your families–and thanks for joining us here on GeneralLeadership.com!

Co-Founder & Senior Curator at GeneralLeadership.com
John E. Michel is a widely recognized expert in culture, strategy & individual and organizational change. An accomplished unconventional leader and proven status quo buster, he has successfully led several multi-billion dollar transformation efforts and his award-winning work has been featured in a wide variety of articles and journals, including the Harvard Business Review. In addition to serving our nation as an active duty General Officer in the United States Air Force, John enjoys helping people learn to walk differently in the world so they can become the best version of themselves possible. He is blessed to be married to the most patient person on the planet and together, they have two amazing sons. You are encouraged to learn more about John at his website, www.MediocreMe.com
- Contact John Michel via email ( JohnMichel@GeneralLeadership.com)
- Military Biography
Tags: holiday