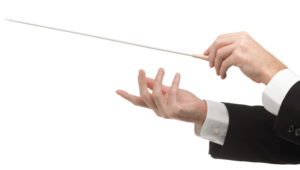 “The conductor of an orchestra doesn’t make a sound.  He depends, for his power, on his ability to make other people powerful.”
Benjamin Zander

I grew up playing the violin in an orchestra. As a young man, I didn’t fully appreciate how important the conductor’s role was towards conducting a successful concert.  My friends and I were doing all the heavy lifting of learning the music and playing the notes.  The conductor just stood up there and waved a baton around, how hard could conducting be?

An orchestra is a great example of a team where all members must both do their individual jobs and work together to achieve a common goal.  To be a successful orchestra and to make beautiful music, you must have an inspired conductor (leader) to guide the musicians to success.  Here are a few traits of successful conductors you can use leading your team:

A conductor is not just present for the concert itself, he’s involved in every aspect of preparing for the event.  He sets the goals by choosing the music, ensures the orchestra has the right mix of musicians for the composition and secures a location for the concert.  Then like any good leader, he leads the team in practice and demands perfection.  A conductor can hear during practice where the weak spots are and focus on them.  He can tell if certain sections and even specific musicians are not up to the required standard and work with them to improve.

As Peter Drucker, a man often known as the “founder of modern management”, said, “Conductors do not know how the oboe does its work, but they know what the oboe should contribute”.  Conductors were most likely musicians earlier in their lives, but they haven’t played every instrument.  Despite not knowing the inner workings of every instrument, they must know what good performance sounds like and work to achieve it every time.

If you’ve ever been to an orchestra concert, chances are you’ve seen a man with wild, flowing grey hair gesticulating wildly at times and barely moving at others.  It is a conductor’s job to help the orchestra interpret the music.  Any respectable musician can play notes from a sheet of music.  But to play it as the composer intended, with feeling and emotion, can be extremely difficult.

The conductor leads his orchestra in that emotional journey.  After all the practice is done and it’s time to play, the leader guides his team’s performance.  When the music demands allegro, he uses strong gestures and forceful motions to get his orchestra to play lively and quickly.  When the music demands piano, he uses diminutive motions to encourage the musicians to play softly.  George Szell was a famous conductor of the Cleveland Orchestra in the middle of the 20th century.  He said, “Conductors must give unmistakable and suggestive signals to the orchestra, not choreography to the audience.”  Your team must understand clearly your direction as a leader and where to add emphasis to make your symphony a success.

Give credit where credit is due

In the end, it is truly the orchestra that is making the music, just as it is your team that is accomplishing the goal.  A leader, by himself, can accomplish nothing.  It is the leader and the team together that can create a symphony.  At concerts, following the conclusion of each piece of music, the conductor will stand aside and have the soloists stand first for the crowd’s applause.  Then have the entire orchestra stand.  And finally, he bows in recognition of the crowd’s adoration.  One of the most highly respected and accomplished violinist of all time, Itzhak Perlman, said it well.  “I don’t feel that the conductor has real power.  The orchestra has the power, and every member of it knows instantaneously if you’re just beating time”.

Like this article? Also check out “Leadership Drives Culture During Transition“

Occasionally, a conductor walks away from the podium in the middle of a performance to demonstrate an orchestra’s mastery of the music.  The orchestra usually keeps right on going for a few minutes, but eventually, without a conductor would begin to break down.  To achieve the best performance possible from your team, make sure everyone knows his or her own job to perfection, guide the team during the execution of the mission and ensure the real heroes, your team, get the credit for success.  Israeli conductor Itay Talgam said, “A conductor’s happiness does not come from only his own story and his joy of the music.  The joy is about enabling other people’s stories to be heard at the same time”.  Go help your team tell their own stories and create your symphony!

Christopher P Levy is a driven leader with 24 years of experience in operations and international relations. A successful senior DoD leader from the tactical to strategic levels, Chris has earned documented success in the areas of curriculum and syllabus development, contract management and flight operations. He has specialized experience in tactical aviation, Intelligence, Surveillance and Reconnaissance operations and remotely piloted aircraft and is an active duty Colonel with command experience in the United States Air Force. With three NATO tours in Turkey and Afghanistan, Chris has demonstrated exceptional ability to succeed in multinational organizations. He and his wife, Wendy, live with their three children in Virginia.
Tags: competence, conducting, credit, emphasis, Leadership, perfection, practice