Cubs and Aspirations – Humor from Section 220 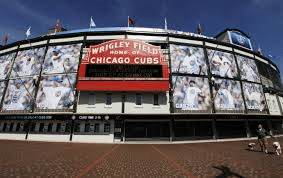 “Cubs win world series
… against Miami?”
Marty McFly
Back to the Future II

58 degrees, virtually no wind, unusual this time of year close to Lake Michigan.   It’s the perfect day for Game 6 of the 2015 World Series and the millions of Cubs fans are in a frenzy, a frozen state of anticipation. Ernie Banks would surely say, “Let’s play two,” in an attempt to capture the excitement that has avoided the Cubs since 1908.  The last time the Cubs played in the World Series was 1945 and they lost to the Tigers in seven games.  Now they have a chance to get even as they lead the Tigers three games to two, thanks to the masterful three- hitter Jon Lester threw at the Tigers yesterday in Detroit. Arriata will take to the mound today in an attempt to close out the Series–Verlander will seek his second Series win.   If the Cubs win, batten down the hatches as this town, no, the world, will erupt like a volcano.   29 October 2015 will go down in history like 4 July and 25 December. 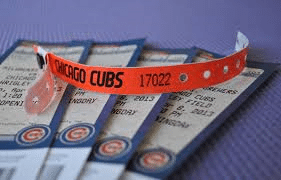 It was sort of a last minute freakish thing but Trey Nuccio and his grandfather, Chief Bob Gaylor, impulsively purchased two tickets to Game 6, thanks to Trey’s mother, Carol, who spotted the “For Sale” while surfing the internet.  Trey and the Chief agreed that $425 per ticket plus related expenses was worth the opportunity to witness in person baseball history on scene.  After viewing the Wrigley Field seating chart, they agreed seat 13 and 14, Section 220, row RR in the mezzanine would offer a panoramic view.   Of course, there are no bad seats in Wrigley.

As they jauntily walked up Addison Street, Trey and the Chief could see the right field side of the famous ballpark.  Giddiness embraced them as they realized what was actually happening and hopefully was about to happen.  From the famous poem, “Casey At the Bat,” the Chief recites the line “Hope springs eternal in the human breast.”   With still two hours before game time, they agreed a cold beer at Cubbie Bear Lounge would accentuate their adrenalin flow.    The joint was packed as they elbowed their way toward the bar.   The first sip drew an “Aaah!” from both of them.

They entered the park at 1:30 p.m., a rare weekend Series game with the first pitch at 3:00 p.m.   95 percent of the fans were decked out in Cub apparel and more than 95 percent of the spoken comments exuded a very positive prediction of the outcome of Game 6. Even the thought of losing the Series constituted a serious sin and was immediately forgotten.

A review of the box score would reveal an early pitchers’ duel; at the end of 5 innings it was 0-0 as only one runner from either team had reached third base. In the top of the 6th, Cabrera sent a letter-high fastball out onto Waveland Avenue– fortunately, no one was on base.   A hush enveloped the crowd but only for a moment. It takes more than a one-run lead to discourage a Cubs fan. Rizzo’s 42-home-run league-leading season offered hope for a later inning comeback.

Time was no longer important–innings had become the key factor. It was still 1-0 as the Cubs came to bat in the bottom of the 8th with the middle clout of their lineup due to face Verlander who so far had a 2-hitter going.    But after Baez struck out, Castro hit a sharp grounder between short and third as hope and tension mounted.     Rizzo strode to the plate–Trey and the Chief looked at each other with a big grin and a shrug.  If it were going to happen, now would be the time. 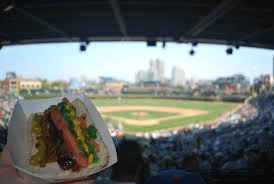 Trey and the Chief had savored a Chicago hot dog, an $8 Strohs, and shared a bag of unshelled peanuts.   How could life be better?   This was it–nirvana–the ultimate–Shangri-La!   Even better than LSU beating Alabama!

No doubt Rizzo hit some of his 42 when the Cubs were leading or losing by 6 or 8 runs–but to hit one when all is on the line, when the fate of the world is at stake, when 43,000 fans are screaming, that’s a much different scene.  But that’s exactly what he did with two strikes and two foul balls.   Bedlam!   Pants wetting!  High/low fiving! We still need three outs but for now, absolute ecstasy.

Do we let Arriata pitch the 9th or bring in one of three (two rightees and a leftee) from the bullpen? That’s debatable but only Madden can make that decision–he chose to let Arriata go for the final three.   “After all,” Madden said later, “Bumgarner did it for the Giants last year.”

It took 45 minutes to exit Wrigley but no one complained.   The concerns of the world were secondary for now; absorbing the moment was paramount.

As they exited onto Addison, Gramps informed Trey that they were close to the Sutcliffe section of pavers where the imbedded paver read proudly, “BOB GAYLOR, CUB FAN FOR LIFE.”  Why not take a moment and view the paver one more time–possibly, no probably, the last?   Knowing the approximate location, Trey spotted the treasured memento.

They stood over it for a moment, Trey and the Chief, unbelieving in what they had witnessed.   Did it really happen? Is it a dream? 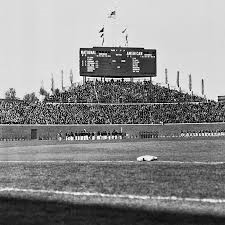 The Chief knelt on one knee to gently rub the red brick. It had been 77 years since he had seen his first game at Wrigley (1938) with his mom and her dad, Grandpa Earl. Ah, the memories!

Pirates had beaten the Cubs that day 14-6 and, Lord knows how many losses the Chief had suffered through since that youthful day. 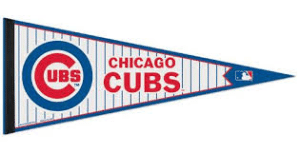 Later, Trey would relate to family members and swear that as he looked at Gramps’ paling face, he saw a large grin and that the lips were formed as if to say, “Cubs win!”

A Cubs pennant was on display at the Chief’s memorial service.

Immediately following retirement from the United States Air Force, Bob Gaylor accepted employment with United Services Automobile Association (USAA), a firm of 16,000 employees with headquarters in San Antonio, Texas. Hired as a management development specialist, he instructed and promoted leadership styles that encouraged and permitted employee involvement in all facets of management.

Gaylor is now a nationally recognized public speaker, motivator, and champion of employee commitment and customer service. He was a resource speaker for The Executive Committee (TEC), an international association of CEO’s; he has spoken on cruise ships and continues to address military, professional, civic and educational audiences. He averages 30 Air Force base visits annually speaking at various Air Force events.

Bob and his wife, Selma, were married for 59 years until her passing in January, 2012. Together they had 4 children, 6 grandchildren, and 2 great grandchildren. Bob resides in San Antonio, Texas.
Tags: Chicago Cubs, Chief Master Sergeant of the Air Force, CMSAF, Gaylor, Humor