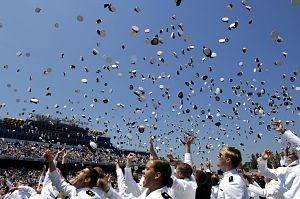 “If you have a culture that understands how to celebrate its successes, people will remain motivated, achievements will be valued more completely, and deeper relationships will be forged within the group.”
John Coleman

I recently attended the Airman Recognition Ceremony at my base in Baltimore, MD and the Officer Training School Commissioning Ceremony at Maxwell Air Force Base in Montgomery, AL. Both of these events were great celebrations of the academic and service accomplishments of airman. Both included traditional elements that were foreign or strange to the participants and their guests. However, I observed that these elements were not only accepted by the participants and audience, but appreciated. This observation made me think about what makes some events within organizations true celebrations that members look forward to and appreciate, and others that become events that members are reluctant to attend and not appreciated.

As I reflected on both ceremonies, there were a few consistent elements. First, both incorporated traditional military elements. Second, both focused on recognition. Finally, there was genuine appreciation for those being recognized by the audience and the participants.

Incorporating military tradition is something that is woven into every military ceremony. What I noticed by observing the events I just attended was that the military traditions incorporated were probably foreign to the audience and may have been foreign to some participants. At first thought, it may seem that this would take away from the ceremony. Quite the contrary, there was an air of interest and appreciation for these ceremonial activities. This may be a result of the public’s general interest in military traditions though their experiences. More practically, I found that the scripts during both ceremonies explained what was happening and why during the ceremony. This created an interest and an understanding of the action. This interest and understanding led to an appreciation among the audience members and participants.

Most experts say that regular celebrations in organizations are necessary for a positive culture. Developing effective celebrations is challenging. The celebration must be appreciated and embraced by the organizational members. I believe that a focus on recognition is important. I also believe that focusing on recognizing accomplishments and achievements earned over a time period is important. These accomplishments and achievements should remain the focus and if there is a selection of a “winner”, this should remain secondary to the recognition of those who have earned it over the time period. Weaving tradition into ceremonies either through venue, time of year, or type of award can help create a positive expectant culture. When members know how and when accomplishments are going to be rewarded, a culture of expectation and motivation is formed.

Here is how the military does it. How do you celebrate within your organization? Is it appreciated by your members and is it focused to recognize the achievers in an expectant way through traditions and type of recognition?

Author at GeneralLeadership.com
Todd Hirneisen is an educator and military leader. Todd has been a high school teacher and coach for 20 years and is currently the Commander of the 235th Civil Engineer Flight, Maryland Air National Guard, Baltimore, MD. He is a student of organizational leadership and seeks to expand his capabilities through leadership experiences, academic opportunities, and by providing insights from his experience. He lives in Gettysburg, PA with his wife, Rebekah and his three children.
Tags: Accomplishments, Achievement, Achievements, award, Celebration, culture, Hirneisen, Recognition, reward, Traditions