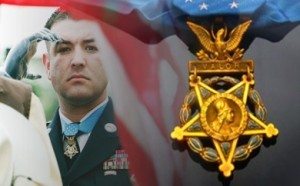 Within a matter of minutes, the helicopters touch down and the Rangers immediately come under fire. One of the American soldiers who emerged from the helicopter that day was Staff Sergeant Leroy Petry. Seeking cover, Petry and another soldier pushed headlong into courtyard with high mud walls. And that’s when the enemy opened up with their AK-47 assault guns.

Role Model’s in Our Midst

– We see it in parents who make it a priority to instill in their children the importance of honesty, integrity and serving others;
– We see it in the compassion of high school teachers who invest extra time to mentor young people who are struggling to keep up, fit in or who just need someone to believe in them;
– We see it in the emergency service workers, police officers and all those who risk their lives every day in our cities to keep others safe;
– We see it in business people, politicians and pastors who refuse to comprise their values, even when no one would know if they chose otherwise;
– And we see it in coaches, counselors and all those every-day heroes whose positive examples inspire us to make going the second mile, second nature.

It is a well established fact that we look to others for guidance on how to do everything from resolving conflicts, to building our businesses or pursuing our dreams. For example, long before he ever became a Beatle, John Lennon idolized many of the old rhythm and blues greats, people like Chuck Berry and Muddy Waters. He had their pictures on his wall and used them as inspiration when he first began playing the guitar.

At the same time, we must never forget that we are always serving as role models to others. In fact, sociologists confirm even the most introverted person in the world will influence at least 10,000 people in their lifetime. No matter who you are, where you work, or what title, position, or rank you possess, you will leave your mark, for good or bad, on scores of people. Helping us all to understand why role modeling is the most powerful message we will ever send to those around us.

How would things change in our world if hero worship didn’t disappear with adolescence? What if taking notice of those particularly remarkable people in our lives helped remind us of the value of setting an example worth emulating?

So my advice to you is simple: choose your heroes and role models wisely, and let them lift you to heights you would not have risen to on your own.

Co-Founder & Senior Curator at GeneralLeadership.com
John E. Michel is a widely recognized expert in culture, strategy & individual and organizational change. An accomplished unconventional leader and proven status quo buster, he has successfully led several multi-billion dollar transformation efforts and his award-winning work has been featured in a wide variety of articles and journals, including the Harvard Business Review. In addition to serving our nation as an active duty General Officer in the United States Air Force, John enjoys helping people learn to walk differently in the world so they can become the best version of themselves possible. He is blessed to be married to the most patient person on the planet and together, they have two amazing sons. You are encouraged to learn more about John at his website, www.MediocreMe.com
- Contact John Michel via email ( JohnMichel@GeneralLeadership.com)
- Military Biography
Tags: choice, General, hero, Heroes, Leroy Petry, michel, sociology