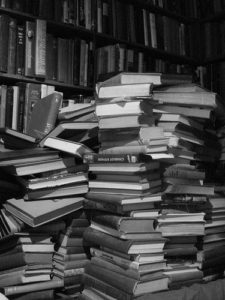 Not all readers are leaders, but all leaders are readers. -Harry S. Truman

As a student at both Air Command and Staff College and National Defense University’s  Eisenhower School, I was privileged to hear dozens of accomplished national leaders speak. Generals, Supreme Court justices, Congressional representatives and senators, leaders in industry. We even heard from two sitting presidents. They came from very diverse walks of life and professions but all had a number of things in common: they were all early risers, intellectually agile, often men and women of faith, and committed to their families and to the country. They were also all–to person–voracious readers.

Noted Victorian era moralist and author G.K. Chesterton once wrote, “Learn from others’ mistakes, you don’t have time to make them all yourself.” It’s one of my favorite quotes and it underscores the need to spend time learning from others. For busy military professionals, or leaders in any profession, that means devouring books and publications to gain the benefit of others perspectives. Reading books, blogs, and periodicals are ways to help develop perspective, particularly on current events. Our teams count on us as leaders to have perspective and not act rashly or out of ignorance. I know it seems basic, but spending time with a book gives us the chance to cross space and time to listen to others voices. It allows us to put current events in context, and gives us tools to process things going on around us.

What Should I Read?

The easy answer to the question, “What should I be reading?” is everything. Leaders, particularly at the executive level, should be versed in history, politics, economics, and science. These subjects are key to understanding the environment as well as the motivations of others. Of course, I’ve written many times that leaders are in the people business. The better we understand people, both individually and as a group, the better we’ll be at motivating and inspiring people to high achievement. Of course, “man does not live by bread alone,” so your leadership reading library should also include fiction, especially literature. These books form the the basis of much of our culture (whether we know it or not), and culture sets the framework for what people value. Popular entertainment has it’s place, of course, but have you ever heard anyone read a book and then say, “the movie was better?”

A question I’m asked often, is “what books do you recommend?” The list is always evolving, of course, but here’s a few books that almost always appear on my lists. If you have an add for the list, tell us in the comments below!

Army Colonel James McDonough examines leadership through a fantasy allegory of an infantry officer in Purgatory until he leads his mechanized task force to victory over the demons inhabiting the battlefield. Great leadership lessons.

War as I Knew It, General George S. Patton, Jr.

No list is complete without this candid memoir from one of America’s greatest wartime commanders. Filled with historical tidbits and lessons applicable to executive leadership in any large organization, this one is a must read.

Empire by Default: The Spanish-American War and the Dawn of the American Century, Ivan Musicant.

America’s entry into the world stage at the end of the 19th Century was not a smooth one. Lessons about leading among peers at very senior levels, logistics preparation and management, organizational dynamics, and leading when you’re on your own abound in this interesting read.

The Silo Effect: The Peril of Expertise and the Promise of Breaking Down Barriers, Gillian Tett.

In this book, Tett uses the 2008 financial crisis as a case study in organizational culture. She points out that very large and respected international corporations lost trillions of dollars because of their inability to communicate clearly across internal teams or “silos.”

In my mind this is the definitive work for working in a globally networked organization. Gen McChrystal talks about his successful campaign against Al Qaeda in Iraq. He created a network of special operators and support forces that rapidly leveraged intelligence and technology, coupled with the expertise of the world’s greatest special operations forces, to crush the insurgency in Iraq.

Written by two former SEAL officers, this book is a “how to” manual on small unit leadership. It’s a candid recounting of battlefield successes and mistakes, and how those leadership lessons apply to both military and civilian environments alike.

Written by the General Leadership Foundation’s own Brig Gen (ret) John Michel, The Art of Positive Leadership is a series of essays written mostly during his time in Afghanistan. Michel gives great tips for inspiring high performance even during stressful situations.

And finally, I humbly submit my own flagship leadership book:

Developed over a 30 year military career and a lifetime of leading, Leading Leaders lays out the foundation for character-based leadership. Illustrated through personal stories and anecdotes, I believe this books is a must read for anyone who wants to improve their productivity and their character.

Colonel Mickey Addison is a career Air Force officer, a blogger and author, and is a frequent contributor to military newspapers and journals, including Air Force Print News, Armed Forces Journal, and The Military Engineer. Mickey is a contributing author at GeneralLeadership.com, People Development Magazine, and founded his own publishing company: Lead the Way Media. As an Air Force officer, Mickey has handled national portfolios totaling billions of dollars. He’s presented on dozens of topics to senior leaders in government, industry, state and federal government, and worked with international business and government executives and in a dozen countries in Asia, Europe, and the Middle East.