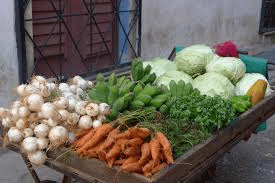 “Why hurry over beautiful things? Why not linger and enjoy them?”
Clara Schumann

A father and his son farmed a small piece of land. Every so often, they would pile the ox-cart up with vegetables they had grown in their own garden and trundle off in the direction of the nearest city to sell them.  Outside of their name and small family farm, father and son seemed to have little else in common. The old man believed in pausing to enjoy life’s beauty while the son was the go-getter type.  One morning in the summer of 1945, they loaded the cart with produce, hitched their only ox and set out. The young man figured that if they kept a steady pace going all day and night, they could get to the city market by the next morning. He walked alongside the ox and kept prodding it with a stick.
“Take it easy,” said his father. “You’ll last longer.”
“If we get to the market ahead of the others,” remarked the son, “we have a better chance of getting good prices for our product.”
The older man pulled his hat down over his eyes and went to sleep on the seat. Four miles and four hours later, the duo came upon a small house.
“Here’s your uncle’s place,” said the father, waking up from his long nap. “Let’s stop in and say hello.”
“We are already an hour behind schedule,” complained the go-getter.
“Then a few more minutes won’t matter,” replied the father. “My brother and I live so close, yet we see each other so seldom.”

The frustrated young man fidgeted while the two older gentleman enjoyed a good cup of tea and shared stories about their families for just over an hour.  On the move again, the father took his turn leading the ox. In just over a mile, they came across a fork in the road. The man directed the ox to go right.
“Left is the shorter route,” said the son.
“I know,” replied the father. “But this way is so much prettier.”
“Have you no respect for time?” asked the impatient young man.
“I respect it very much,” the father replied. “That’s why I like to use it for looking at pretty things. You see, the path to the right leads through the woodlands and passes through a field of magnificent wildflowers.”

The young man was unfazed as he was so busy lamenting the time they had lost that he failed to notice the enormous garden of flowers, plants, and lush forest that surrounded them.
“Let’s stop and sleep here,” remarked the father.
“This is the last trip I will take with you,” snapped the son. “You’re more interested in gazing at flowers than in making money.”
“That’s the nicest thing you’ve said to me in a long time,” smiled the older man. A minute later he was sound asleep.

A little before sunrise, the young man shook his father awake. They hitched up the ox and wagon and continued on their journey.  A mile and an hour away they came upon a farmer trying to pull his cart out of a ditch. “Let’s give him a hand,” said the father.  “And lose more time?” exploded the son.  “Relax,” said the old man. “You might one day find yourself in a ditch.”  By the time the boy and the father recommenced their journey, it was almost eight o’clock.  Suddenly a great flash of lightening split the sky. Then there was thunder. Beyond the hills, the heavens grew dark. “Looks like a big rain in the city,” said the old man.

It wasn’t until late afternoon that they got to the top of the hill overlooking the town. They looked down for a long time.  Neither of them spoke.  Finally the young man who had been in such a hurry said, “I see what you mean, father.”

They turned their cart around and headed home from what had once been the city of Hiroshima.

From the very first time I stumbled across a version of this story in a decades old edition of Readers Digest, I’ve never forgotten it. The simplicity of the tale and profound message it conveys struck a chord deep within me. Why? Because it reminded me of one of life’s most precious and priceless gifts is learning to linger.

According to Webster, to linger is “to stay somewhere beyond the usual or expected time.” Lingering. Staying just a bit longer is so hard for me. I’m a type A, get’er done kind of person.

I suspect many of you reading this are, too.

I have long pondered the importance of slowing down, of pausing long enough to reflect on what a particular situation or circumstance could teach me. The problem is, I have not been very successful in actually doing something to periodically interrupt the ever-present pull to hurry along, to get busy pursuing the next thing on my ‘to-do’ list.

But I decided recently, enough is enough. If I am truly going to live up and into my potential as a leader, at home, at work, in my church, and in my community, I need to spend more time pausing to appreciate, reflect, and learn from life’s ordinary moments.

The most precious moments of life occur when we take time to linger.

How do I begin, you ask? I recommend you start by following the example of the wise man in our story:

You will be more refreshed, more productive, healthier and happier;

2. Take time to enjoy the company of loved ones.

Nothing, and I mean nothing, is more important than nourishing your most important relationships;

3. Take time to enjoy the beauty arrayed around you.

The most incredible man-made work of art cannot get close to the beauty arrayed around you in nature; and,

4. Take time to help someone in need.

As the age-old saying goes, “it is always better to give than to receive.”

The most precious moments of life occur when we take time to linger.

So today, let me urge you to resist the temptation of falling into the trap of believing that lingering is wasting your time. Let me challenge you to reject the notion that pausing to indulge in a moment of rest, spend extra time with someone you love, savor the splendor of a sunset, or bless someone you encounter in your journey, is anything but time well invested.

I have been learning slowly but surely that there is often no better use of my time than to linger. You should consider giving it a try, also!

Co-Founder & Senior Curator at GeneralLeadership.com
John E. Michel is a widely recognized expert in culture, strategy & individual and organizational change. An accomplished unconventional leader and proven status quo buster, he has successfully led several multi-billion dollar transformation efforts and his award-winning work has been featured in a wide variety of articles and journals, including the Harvard Business Review. In addition to serving our nation as an active duty General Officer in the United States Air Force, John enjoys helping people learn to walk differently in the world so they can become the best version of themselves possible. He is blessed to be married to the most patient person on the planet and together, they have two amazing sons. You are encouraged to learn more about John at his website, www.MediocreMe.com
- Contact John Michel via email ( [email protected])
- Military Biography
Tags: General, Growth, Learning, Linger, michel