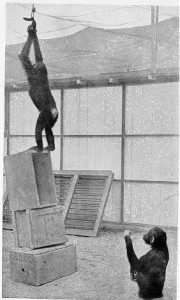 Kohler, a psychologist, arranged an experimental cage in which he placed several different sized boxes and other objects.  He then hung a plump bunch of bananas high in the cage so they would be inaccessible to the monkeys.  After releasing the monkeys into the cage, it didn’t take them long to notice their favorite delicacy positioned high above their heads.  Most of the monkeys proceeded to jump around, whooping and hollering.  Although all the monkeys had their gazes firmly fixed on the bananas, none of them even came close to possessing them.

But it turns out one pair of monkeys was different than the others.

Instead of swinging from the side of the cage and jumping for the bananas without any real chance of achieving success, these two sat and quietly absorbed all that was arrayed around them. Then they made their bold move.

While all the other monkeys were busy doing the same old thing, the two thoughtful monkeys began collecting the boxes that were strewn across the cage. After dragging them to the middle, they then rearranged them one on top of the other. And just like that, this pair of innovative primate engineers were able to easily reach the bunch of delicious bananas, much to the delight of their less creative monkey friends.

The Lesson: From a very early age we are conditioned to believe its okay to go along if it will help us get along. And frequently this works for us. Unfortunately, most of us never break out of this type of thinking.  As a result, we are like the majority of the monkeys in the story whose inability to deviate from the status quo left them hungrily staring at a delicious prize that was seemingly out of reach.

What I find particularly noteworthy about Kohler’s experiment is that, as is often the case, the solution to the problem (in this case, building a ladder out of the boxes), was right before their eyes the entire time. Only two monkeys out of the entire group, however, chose to look beyond their circumstances. Seeing the boxes not only for what they were, but also for what they could be.

Here’s my point. The only way you can ever expect to be more and do more with your life is to understand that sometimes, you have to be willing to go above and beyond what others are doing around you. Taking the path of least resistance or settling for “good enough” just because that’s what everyone else is doing just won’t bring home the bananas. So be willing to take a risk. Don’t be afraid to unleash your entrepreneurial spirit on the world. Choose to live life by your rules, not someone else’s. As George Bernard Shaw so aptly reminds us, “The people who get on in this world are the people who get up and look for the circumstances they want, and if they can’t find them      , make them.” Be that person.

For you leaders and managers reading this, there’s another bonus lesson from this story. If you want to take your organization to the next level, look for those in your ranks who are willing to think differently, act boldly and do more. Find those innovative “monkeys” in your midst and promote them while passing the close-minded “monkeys” to your competitors…and watch who ends up with the bigger bunch of bananas at the end of the day.

Co-Founder & Senior Curator at GeneralLeadership.com
John E. Michel is a widely recognized expert in culture, strategy & individual and organizational change. An accomplished unconventional leader and proven status quo buster, he has successfully led several multi-billion dollar transformation efforts and his award-winning work has been featured in a wide variety of articles and journals, including the Harvard Business Review. In addition to serving our nation as an active duty General Officer in the United States Air Force, John enjoys helping people learn to walk differently in the world so they can become the best version of themselves possible. He is blessed to be married to the most patient person on the planet and together, they have two amazing sons. You are encouraged to learn more about John at his website, www.MediocreMe.com
- Contact John Michel via email ( JohnMichel@GeneralLeadership.com)
- Military Biography
Tags: Change, Growth, Kohler, Learning, michel, monkey, psychology, Risk, Team