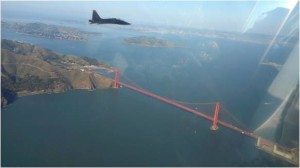 In my mind, I was the best fighter pilot in the world, but as soon as I took command that no longer mattered. I was in charge of an unfamiliar organization, one in whose mission I was not well versed. It felt as if I was blindfolded and led to the helm of the Titanic; left there with a hearty, “She’s all yours!” I was in charge but not really sure which way to steer. Rather than flying F-15s, I was in charge of flight simulators, contract negotiations and syllabus development. The transition was painful.

Alan Mulally, the former CEO of Boeing, started his career there as an aerospace engineer. In 2006, he transitioned to the CEO of Ford Motor Company. He did not immediately start wielding a sledgehammer of change, but took the time to understand the framework of the organization and the problem. Conversations with Bill Ford, the former CEO, industry experts and his team leaders helped him understand the direction he needed to steer. This can take weeks, possibly months, but is often an intense, focused period that must be finished before making significant changes.

As Lawrence J. Peter, creator of The Peter Principle, said, “if you don’t know where you’re going, you’ll probably end up somewhere else”. A leader must generate and transmit his vision for the organization, a difficult task when not familiar with the organization’s mission. Utilize all available resources, including shareholders, board of directors, your customers and industry experts to help you understand the framework of your unique situation. As a commander, I worked with my commanding general, the leaders of each weapon system my squadron supported and leaders in the simulator industry to help me understand the framework of my organization.

Once you understand the framework, hang the new vision for all to see. As John Kotter wrote in his article Accelerate!, “Communicate the vision and the strategy to create buy-in and attract a growing volunteer army.” The leader becomes the cheerleader for the organization, focusing everyone’s energy in the same direction. Engagement at all levels inside and outside the organization is necessary to steer towards success. My squadron had detachments in 13 locations around the country. I made it a priority to visit each one and discuss my vision for success, while also transmitting that vision to our customers and our chain of command.

“Engagement at all levels inside and outside the organization is necessary to steer towards success.”

Once a vision is established, a leader’s next step is to ensure he has the right people and those people have the right skills. This is the hard part. Without the benefit of experience in the organization, the leader must rely on other methods. This will take time and concerted effort from the new leader. Reviewing personnel files, studying past performance appraisals and spending time to get to know key team leaders outside the work environment can help a new leader identify trusted agents who have the organization’s success at heart. Within 1 week of taking command, I spent time with each of my team leaders, reviewed their history, learned who they were and began forming the framework of the organization in my mind.

The new leader must position those trusted agents on the new framework in locations where they are poised to carry out the vision of the organization. If your people need training, make it happen. If they need tools to accomplish their job, find a way to acquire them. Spend the time necessary to mentor your people, focus them on the vision and position them on the organization’s framework for success.

The leader doesn’t just mentor others; they also need mentoring from those with more experience in similar situations. Leaders in an unfamiliar organization need the support of a peer group and should reach out to leaders in similar organizations or join organizations comprised of similar individuals. This networking leads to opportunities and ideas that otherwise would have remained out of reach.

“The leader doesn’t just mentor others; they also need mentoring from those with more experience in similar situations.”

Once the right people have the right training and are moving in the right direction, a leader must establish goals. The work done to establish the framework and set a vision will illuminate the path to the goals. The new leader can utilize the trusted agents already identified to assist in determining that path. Inputs from the leader’s peer groups, industry experts and chain of command all feed into this critical aspect of establishing organizational success.

Motivating, mentoring and measuring. Three simple yet powerful words when used by leaders of any organization. As a leader of an unfamiliar organization, you may not be able to tell your employees how to accomplish a task, but you can certainly tell them what to accomplish, guide them along the way, remove obstacles and watch as they achieve amazing results!

Christopher P Levy is a driven leader with 24 years of experience in operations and international relations. A successful senior DoD leader from the tactical to strategic levels, Chris has earned documented success in the areas of curriculum and syllabus development, contract management and flight operations. He has specialized experience in tactical aviation, Intelligence, Surveillance and Reconnaissance operations and remotely piloted aircraft and is an active duty Colonel with command experience in the United States Air Force. With three NATO tours in Turkey and Afghanistan, Chris has demonstrated exceptional ability to succeed in multinational organizations. He and his wife, Wendy, live with their three children in Virginia.
Tags: boeing, chris levy, ford, kotter, Leadership, measure, measuring, mentor, mentoring, motivate, motivating, organization, peter principle, results, squadron