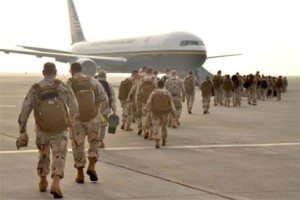 The following short story is part 2 of a special 3-part series sponsored by General John E. Michel related to veteran’s stories and others-centered leadership.  This particular story was written by USMC Sgt John Preston, who will be a guest on our Wednesday evening radio program at 9pm Eastern/6pm Pacific.

Words that spilled out of me as I sat in front of my piano and began to play a beautiful melody. I was unaware yet what it was I was writing but as I began to sing to the melody my mind was racing at a thousand miles per hour. It was as if thoughts and emotions were overrunning one another and still the words came out clearly.

“Just one more time that I must cross those lines and I am home.”

It was exactly six months since I had learned of the death of Sergeant Charles Strong of the United States Marine Corps. Charles was killed by an insider attack on his last day of his fourth combat deployment.  Known as “Chuck Diesel” by his friends, “Charlie” by his family, but to his wife (then 8 months pregnant) he was “Charles” and he was her whole life.

I didn’t know Taylor on that day in March as I was placing words on paper, spiritually connected to the heart of a man that had given his life for our freedom. Though the light of his life had vanished from this world the previous September, I can promise you, his soul still burns bright as it did on that day. As I wrote, I began to think of my own combat deployment. Not the combat itself but the longing for home that we all felt in our hearts. It was strange the feelings that would rush to your mind as the mortars rained down around you. Just one more 2AM trip to White Castle or one last taste of a crisp Bud Light. More importantly one more chance to hold the one I love in my arms. For Charles, I’m sure it was the thought of holding his new baby girl for the first time. (He actually ordered and shipped home several packages of baby clothes as well as handed out cigars to all of the Marines in his squad.) Charles was dedicated to being a father and husband but his dedication to his country never allowed him to meet his beautiful daughter Sophie.

The words had poured out of me and within about twenty minutes I had finished it. I turned on the voice note on my iPhone and I recorded the song. By its completion I was overwhelmed, but remember thinking just one thing… I’m going to make a video to this.

No plan, no money, no film crew, no set, but we were going to make a video. I’ve been told that if you act as if it has already happened then it will. That we, people, have the power to create and manifest whatever future in which we choose to live. I had decided to test that theory and create my own destiny. I picked up the phone and called every video production crew in L.A. and began to get estimates rolling in. Although I had no investors, I knew I would pay with my own money if necessary. Through my friend that was on the battlefield with Charles when he passed, I was able to get in contact with Taylor and give her an opportunity to hear the song. Her opinion meant the world to me, so I was terribly nervous for her to hear it. Though the song was difficult for her to hear, she said it was if she was reading his last emails or letters before he was gone.

Somehow, some way, things continued to progress. I had talked to Taylor several times now and had invited her to fly out and be a part of the video. We had originally only expected to interview her but we eventually decided to ask her to play herself in the video. I had chosen the Faculty of Media production crew to shoot the video and somehow we had managed to book the set used in the film American Sniper for the shoot. Everything continued to evolve organically including the financing we received from American Hero Clothing only two weeks before production! I booked a flight to L.A. for Taylor and reserved her a room in the best hotel in the area. It was happening… Only months prior I was at risk of being shelved by the label. I had completed my contract and my current recordings were in danger of never being heard. But with “Day to Night”, I was back on the map and about to be back in the media. Yes, it was happening.

A reflection from July 9th, just three days before our shoot was scheduled to happen:

Wrong plane, wrong day. I woke up this morning as I would any other day. Looking at my phone thinking, “why is this thing making noise?” This noise was different… It was not my alarm but instead my brother calling. As if it had become a new, awful routine, a call from my brother Nate at 6:15 AM is not good news…

I was driving from point A to B when I called my father. I wanted to catch him up on all that is happening. That Saturday I was heading down to L.A. with the band to record our music video to our new single. All of us know that this video is not only going to change the lives of all of us involved, but also the lives of the millions that will have a chance to share our story and the story of a brave Marine who gave his life in combat.

Dad told me then…

“It’s happening John! Everything we have dreamed of. You have worked so hard and it is happening.”

I had chills! Everything in my life that I’ve done always travels through my father’s approval before I release it to the world. Whether it was joining the Corps or becoming a firefighter, Dad has always given the nod.

It had actually happened before Dad and I had talked. I found out that he didn’t want me to worry about him on what we both know is one of the most important weekends for both his and my dreams.

I lost it. Why? Why did I lose my cool? I yelled at both him and Mom and insisted they go to the hospital first thing in the morning. When I got off the phone I broke; it was impossible at this point to keep it together. I wept for a moment, got my composure and took a breath. It will all be fine! He will go to the hospital and be fixed tomorrow, right?

I called first thing in the morning and Dad was still home asleep. Again, I lost it. I lit my mother up and told her to take Dad to the ER as soon as he is out of bed.

For those of you that don’t know, my father is a Purple Heart award-winning hero that has battled his whole life to stay healthy. He has survived a war, a head on collision with a drunk driver, 20 heart procedures, diabetes, tumors, and three sons that are all Marines. I know he went to war with me when I went.

Needless to say, my father is a bad motherf’er!

“He’s tired.” That’s what I told my mother when we talked. I was afraid he was ready to quit. “We are not going to let him quit Mom. We are almost there and he deserves to live all of this with us.”

Well… The hospital proved our theory; there was something wrong. He had a slow GI bleed that turned into a serious bleed when he was put on blood thinners three weeks ago. I called him and in typical Dad fashion he said, “See, I told you nothing was f’ing wrong.”

He told me not to worry and told me to go to L.A. and take care of business. I told him business will be handled and I said, “I love you dude.”

He told me he loved me and gave the phone to Mom. Mom and I texted until the late night keeping tabs on the tests that had been run. We waited for a scope to be done in the morning to see where the blood was coming from.

He begins to explain how, while Dad was getting the scope that he coded on the table. He said he is currently unresponsive though they got pulses back.

My father is in a coma.

I don’t even know if I packed underwear. I’m on a plane back home to Kentucky. The wrong plane on the wrong day.

“Just one more time that I must cross those lines…”

Dad had not yet woken up and I was just hours from a flight to L.A. from Kentucky. I had decided I was going to cancel the video and was going to stay with my father. It was then that my family intervened and insisted I shoot the video. Apparently it was all my father had spoken of and what he had referred to as my destiny over and over again. I had done everything I could to choose my own destiny and had experienced so much success. Why is it now, with just hours before my flight, that my entire world was in shambles.

I was a wreck… The entire shoot I was a wreck. I was happy to meet Taylor and baby Sophie but it was so hard to focus on any other world besides my father laying in a bed in a coma. The video producers said I put on a phenomenal performance but the reality was it was no performance. Every bit of my emotion laid out on that film was for my father, for Charles, for every one of our Nation’s heroes that had given their life for our freedom.

I lost my father… Just ten days after I returned home from the shoot my personal hero was taken off life support and released to guard the gates of heaven.

On September 15, 2015, one year after Charles was taken from the world, “Day to Night” released in the Top 100 new alternative releases. The video now has over 450 thousand views on facebook and growing. This video and story has generated media and stories across the nation and has not only brought attention to our heroes still sacrificing every day for our freedom but has also given me a new stage with my fight against PTSD and veteran suicide.

Co-Founder & Senior Curator at GeneralLeadership.com
John E. Michel is a widely recognized expert in culture, strategy & individual and organizational change. An accomplished unconventional leader and proven status quo buster, he has successfully led several multi-billion dollar transformation efforts and his award-winning work has been featured in a wide variety of articles and journals, including the Harvard Business Review. In addition to serving our nation as an active duty General Officer in the United States Air Force, John enjoys helping people learn to walk differently in the world so they can become the best version of themselves possible. He is blessed to be married to the most patient person on the planet and together, they have two amazing sons. You are encouraged to learn more about John at his website, www.MediocreMe.com
- Contact John Michel via email ( JohnMichel@GeneralLeadership.com)
- Military Biography
Tags: Boot Campaign, Deployment, General, Iraq, John Preston, michel, USMC