Are you a Pirate or a Leader…or Both? 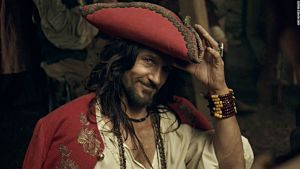 “In an honest service there is thin commons, low wages, and hard labor; in this, plenty and satiety, pleasure and ease, liberty and power…a merry life and a short one, shall be my motto.”
Bartholomew “Black Bart” Roberts

What is it about pirates that always seems to inspire us?

Admit it.  There are times in your life you’ve dreamt of being a pirate.  Throwing off the bounds of normal society, casting your lot on the high seas and reaping the spoils of war.  Hollywood has supplied us with numerous images over the last century of the dashing pirate Captain, standing on the bridge, leading his men against the wrongfully imperial Navy of some former colonial power.  I fully acknowledge that pirate life was often short and cruel, but indulge me for the sake of learning…

A successful pirate ship is the perfect example of a well-oiled team.  The Captain is the leader, channeling the team’s efforts towards a common goal.  Admittedly, his methods may have been cruel, but the leadership principles still ring true today.

A good Captain had a vision of where he wanted his enterprise to go.  Not just geographically, but for the growth of the team…a better boat, a larger crew and always more profit.  He let that goal drive all of his decisions.  He translated that vision to his crew by giving focused direction in the form of orders and inspiring his crew to adopt that vision as their own.  As I mentioned in a previous blog How to make an Impact; Think Big, Lead Small, it is so critical to ensure your entire team is moving in the same direction.  Communicate your vision openly and repeatedly to all those that will listen.

A good Captain was bold.  I imagine very few pirate Captains succeeded by following the international laws of the sea.  The Captain would break the rules where he deemed necessary to succeed.  Additionally, he would make up his own rules to shape behavior towards his vision.  Steve Jobs, the co-creator of the Apple corporation summed up boldness when he said, “Why join the Navy when you can be a pirate?”  I’m not asserting you as a leader should break the law, but you must not be afraid to go against the establishment.  If you see an opportunity, make the call and strike out in a new direction.  Make a decision and act on it, that’s why you’re the leader!

A good Captain enforced discipline.  Just like any organization, there were rules on a pirate ship.  The penalties may have been a bit harsher than today, but the threat of walking the plank or 20 lashes certainly kept most crewmembers in line.  Set the standards of behavior for your team and ensure compliance.  Whether that includes dress, personal behavior, ethics or any of a host of other characteristics of human behavior, a team that is allowed to wander off the reservation is soon sunk.

A good Captain shared the wealth.  There’s nothing like booty!  A successful pirate ship could bring in large amounts of riches.  What better way to motivate a group of greedy pirates than to share the boat’s take with everyone?  All the better to make them work even harder next time.  As the pirate Blackbeard said, “Only the devil and I know the whereabouts of my treasure, and the one of us who lives the longest should take it all.”  As a leader, figure out what motivates your team.  It could be praise, monetary rewards, successfully achieving goals, time off, etc…  Each team is different, but motivating your team will be crucial to success.

And don’t forget the rum!  A good Captain provided for his team.  He ensured they were well fed and had the training they needed to succeed. Every now and then, he supplied the rum and let the team cut loose.  A team that has fun together forms relationships and bonds that become essential during the stress of combat (or business).  Look for opportunities to let your team de-stress through non-work related activities, such as a ropes course, a cook-out or other team-building event.

I challenge you to become the pirate Captain with your crew.  Throw off the yoke of tyranny that is the establishment and look for opportunities outside the bounds of normalcy.  Be bold and seek new opportunities without having to be told what to do.  Inspire your crew with a vision and ensure their behavior is on par with expectations.  Then ensure your entire team shares in the fruits of success.  A parrot and an eye patch might do some good too.

Christopher P Levy is a driven leader with 24 years of experience in operations and international relations. A successful senior DoD leader from the tactical to strategic levels, Chris has earned documented success in the areas of curriculum and syllabus development, contract management and flight operations. He has specialized experience in tactical aviation, Intelligence, Surveillance and Reconnaissance operations and remotely piloted aircraft and is an active duty Colonel with command experience in the United States Air Force. With three NATO tours in Turkey and Afghanistan, Chris has demonstrated exceptional ability to succeed in multinational organizations. He and his wife, Wendy, live with their three children in Virginia.
Tags: behavior, Captain, Group, Leadership, levy, opportunity, Pirate, Team, Yoda