How To Pitch In: Stone Soup 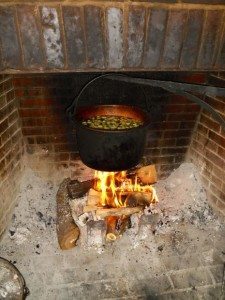 “There are powers inside of you which, if you could discover and use, would make of you everything you ever dreamed or imagined you could become.”
Orison Swett Marsden

One of my favorite old stories tells about three soldiers who trudged down a road in a strange country. Returning from many years at war, they were tired, hungry and homesick. In fact, they had not slept or eaten for two days.

“How I would like a good dinner tonight,” said the first.

“And a bed to sleep in,” said the second.

“I too would enjoy such things,” said the third. “But we must march on.”

So on they marched.

Suddenly, ahead of them they began to make out the lights of a village.

“Maybe we’ll find something to eat there,” said the first.

“And a loft to sleep in,” said the second.

“There is certainly no harm in asking,” said the third.

Now the peasants in that village feared strangers, especially soldiers.  When they heard that three men were coming down the road, they began whispering among themselves.

“Here come three soldiers. Soldiers are always hungry. But we have little enough for ourselves.” And they hurried to hide their food.

Some pushed their sacks of barley under the hay in the lofts. Others lowered buckets of milk down the wells.

They spread old blankets over the carrot bins and hid their cabbages and potatoes inside cabinets and under beds and hung their sides of beef in the darkest recesses of their cellars.

They hid all they had to eat. Then – they waited.

The soldiers stopped first at the house of Jacque and Francoise

“Good evening to you,” the soldiers said. “Could you spare a bit of food and a place for three hungry and tired soldiers to briefly rest?”

“We have not eaten for three days,” said Jacques. Francoise, sporting the saddest look she could muster added, “It has been a poor harvest.”

The three soldiers thanked them and went on the house of Renaurt and Louise.

“Could we bother you for a few morsels of food? And have you some corner where we could sleep for the night?”

“I’m sorry,” replied Renaurt. “We gave everything we could spare to soldiers who came before you.”

At Vincent and Marie’s the answer was the same.  It had been a poor harvest and all the grain must be kept for seed.

So it went for the soldiers as they traveled from house to house all through the village. Not one person had any food to spare or an extra bed to share.

The three soldiers conferred for a moment and then the first soldier called out, “Good people of the village!” The peasants drew near.

The peasants stared. Others scratched their heads. What is this strange concoction called stone soup, they wondered? That would be something to know about.

The peasants brought the largest pot they could find.

“Perfect,” said the soldiers. “And now, water to fill it and a fire to heat it.”

It took many buckets of water to fill the pot. A fire was built on the village square and the pot was set to boil.

“And now, if you please, we need three round, smooth stones.”

Those were easy enough to find.

The peasants’ eyes grew round with wonder as they watched the soldiers drop the stones into the pot.

“Any decent soup needs salt and pepper,” said the soldiers, as they began to stir the stones in the slowly boiling pot.

“Stones like these generally make extraordinary soup. But oh, if there were a few carrots, it would be much better.”

“Why, I think I have a carrot or two,” said Francoise, and off she ran.

She came back with her apron full of carrots from the bin beneath the red quilt.

“The best stone soup should also have cabbage,” said the soldiers as they sliced the carrots into the pot. “But no use asking for what you don’t have.”

“I think I could find a cabbage or two somewhere,” said Marie and she hurried home. Back she came with three cabbages she had hidden under the bed.

“Now if only we only had a bit of beef and a few potatoes, this soup would be good enough for a rich man’s table”

The villagers remembered their potatoes hidden inside of cabinets and sides of beef hanging in the cellars. They ran to fetch them.

The fact these simple villagers could partake of a rich man’s soup – and all from a few stones — seemed like magic to them all!

“Ah,” sighed the soldiers as they stirred in the beef and potatoes, “if we only had a little barley and a cup or two of milk! This would transform this soup into a delicacy fit for a King. In fact, he asked for just such a soup when last he dined with us.”

The villagers looked at each other. The soldiers had entertained the king! Well!

“But – no use asking for what you don’t have,” the soldiers sighed.

Several villagers virtually ran to their homes, returning with barley from their lofts and milk from their wells. The soldiers stirred the barley and milk into the steaming broth while the villagers stared.

At last the magical stone soup was ready.

“All of you shall taste,” the soldiers said. “But first a suitable table must be set.”

Great tables were placed in the square. And all around were lighted torches.

Such a soup! How good it smelled! Truly fit for a king.

But then several of the villagers asked themselves, “Would not such a magnificent soup require bread – and maybe even a little ale or cider?” Soon a banquet was spread and everyone sat down to eat.

Never in the history of the village had there been such a feast.

Never before had the peasants tasted such soup. Especially soup made from stones.

They danced and sang far into the night.

At last they were tired. Then the three soldiers asked, “Is there not a loft where we could sleep?”

“Let three such wise and splendid gentlemen sleep in a loft? Indeed! They must have the best beds in the village” various villagers exclaimed.

So the first soldier slept in the priest’s house.

The second soldier slept in the baker’s house.

And the third soldier slept in the mayor’s house.

In the morning, the whole village gathered in the square to give them a warm send-off.

“Many thanks for what you have taught us,” the villagers said to the soldiers. “We shall never go hungry, now that we know how to make soup from stones.”

“Oh, it’s all in knowing how,” said the soldiers, and off they went down the road. Rucksacks filled with enough provisions to see them safely home.

Though I have to admit I’ve never tried to make stone soup, I strive to do my part anywhere and everywhere I can to create the same positive effect the three soldiers had on the villagers. Namely, to help others discover their own potential to be part of something remarkable. To awaken within those around me a fuller appreciation for the profoundly positive potential that comes to fruition when everyone brings together their unique contributions and abilities in order to achieve a bigger purpose than any one person could hope to achieve alone.

As leaders in our homes, workplaces, worship spaces and communities, we would be wise to remember we are each capable of doing something that adds immense value to our surroundings. All we have to do is open ourselves to generously sharing our hearts, minds and resources with those around us.

Co-Founder & Senior Curator at GeneralLeadership.com
John E. Michel is a widely recognized expert in culture, strategy & individual and organizational change. An accomplished unconventional leader and proven status quo buster, he has successfully led several multi-billion dollar transformation efforts and his award-winning work has been featured in a wide variety of articles and journals, including the Harvard Business Review. In addition to serving our nation as an active duty General Officer in the United States Air Force, John enjoys helping people learn to walk differently in the world so they can become the best version of themselves possible. He is blessed to be married to the most patient person on the planet and together, they have two amazing sons. You are encouraged to learn more about John at his website, www.MediocreMe.com
- Contact John Michel via email ( JohnMichel@GeneralLeadership.com)
- Military Biography