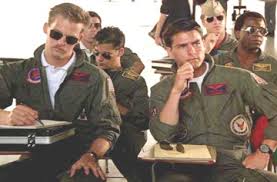 The movie Top Gun forever put the names of Maverick, Goose and Iceman into our lexicon and gave the common person a feel for what a call sign is.  Both the Air Force and Navy use call signs in their pilot communities and the practice is common amongst other elite military units.  Sports teams use nicknames.  It is rumored that President George W. Bush often used nicknames when addressing his team.  Apparently to have the president assign someone a nickname meant you were accepted onto the team.

In my day, the Air Force had a ritual behind the “call sign naming ceremony.” The general rules behind call sign selection were:

I have seen this work in the business sector as well as the military environment.

Before you reject the idea as simply juvenile “boys will be boys” egotism, consider this.  Within your family did you have nicknames?  Did you like it when your parents, siblings and teammates had a good nickname for you?  I’m guessing the answer is, “Yes.”  Well this can work in almost any civilian organizations.

Here are some of the potential team building benefits to consider:

As a civilian consultant, I worked on a proposal team, bidding on a large contract.  I was embedded in a company I had no experience with, and several of my teammates were hired from outside the company for a particular skill set for this proposal.  As the deadline for the bid came due, tensions grew higher, and it appeared that there was a rift developing between the outsiders and those members of the corporation.  After a few days I came up with nicknames for all my teammates.  With the approval of the corporate capture manager/team leader I had ball caps made for all the team members with their nicknames embroidered next to the company logo.  This allowed our little group to form a cohesive team in a high-pressure time sensitive project.  As other members of the corporation joined up to be part of the pink and red team for proposal evaluations, they commented on the cohesion of our group of diverse backgrounds.  We had become a true team or perhaps should I say we were good wingmen to each other.

If this worked to help Maverick, Goose, Iceman, Hollywood and Slider feel a part of a team, it may work for your small group.

One note of warning…while a very self confident fighter pilot may be able to handle a slightly derogatory name given for a particular mistake, don’t allow nicknames that attack a person’s character.  Keep it positive, and politically correct.

Well Goose, its time to buzz the tower.

Coming next, “Gutsiest move I’ve ever seen Mav.”  The art of the candid fighter debrief in improving team performance.


He invites you to join him for a few laughs and an occasional nugget of wisdom on Facebook, follow him on Twitter, or simply ignore him.
Tags: Callsign, Colonel, Goose, Leadership, Maverick, performance, redmon, Series, Top Gun