Top Gun Wisdom: Finding the Real Horses in your Organization 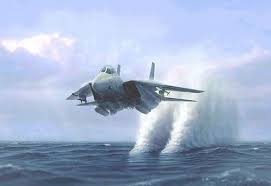 “Tell me, if you had to go into battle, would you want him with you?”
Quote from “Top Gun”

Every organization has a leader whose job it is to produce results: combat aviators, increased sales, on time deliveries, or increased profits. This position almost always comes with a title, “Commander”, Director of Marketing, Executive Vice President, Chairman, or CEO. Each of these positions has some bottom line, some overarching goal that the leader must meet or face the consequences.

Study after ponderous management study confirms what common sense already tells us: while the CEO sets broad strategic guidelines it is the lower ranking subordinates who do much of the real work of an organization. This is true of any organization. Congressional policy is framed by staffers based on a Congressman’s stance, corporate production is really done by workers on the line or by the worker bees in their cubicles, and certainly every military organization has its “iron majors and chiefs” who frame plans and policy and actually do the work of “boots on the ground or bombs on target.”

In the Top Gun analogy, “Viper” asks the key question, “Do you want Maverick on your wing when we go into combat? How do we identify, evaluate and train our own “Mavericks?” Many of today’s most successful American corporations have made their mark with innovative, game changing policies or products. And often the real “out of the box” solutions come from the “Maverick’s” of an organization.

In some cases like Apple and Facebook, the CEO’s themselves are iconoclastic, visionary mavericks. They championed a corporate culture of innovation, which strives to encourage workers, unburdened by the need to answer the stockholders, to be the creative thinkers. These are the folks who organize the working groups and the “tiger teams” to meet the leader’s strategic visions. But when the staff meeting is over and the big boss has framed the goals and objectives these subordinates get together and ask the question, ”How are we going to get this done?”

Sadly many corporate cultures are heavily entrenched in sclerotic bureaucratic management styles. Like giant container ship on the ocean, which takes many miles to make a simple turn, many of our large organizations, especially government bureaucracies can take many years on their own course corrections toward cultural change. Just look at the crises we have seen in entrenched governmental bureaucracies like the Veteran’s Administration or the IRS. There is often no simple fix and the bureaucrats can often outlast their appointed leadership.

For a supervisor in an embedded bureaucracy one of the biggest challenges is to identify the true leaders, the innovators, and the folks who get the job done. These key workers, may often lack a fancy title, but are truly the informal leaders of their organization. A former boss of mine used to say, “In a crisis, go to your horses.” 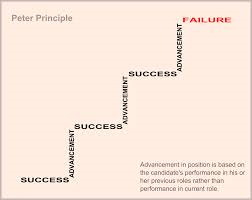 Unfortunately, often times, leadership is based seniority rather than ability.  Age, rank, corporate position, and sadly, gender may have placed a person in charge who is the ultimate epitome of Lawrence Peters, “Peter Principal.” Mere time in the bureaucracy has allowed these men and women to rise to their highest level of incompetence.  The young bucks, the real horses are still many years from having the corporate rank or title, the government service level, or the military rank to be in a position of power and decision-making. We have all seen organizations where the assistant or deputy was the real go to person on a team but lacking the corporate “pedigree” they remain years away from leadership or may never attain decision-making status.

Yet it is critically important to identify these folks so they can at best, move up in the organization or at least remain unconstrained to provide their abilities and leadership. Military leaders often say that you go to war with the people you have not the people you wish you had. So it is your job to know who your real horses are.

The rules of your corporate culture may prevent you from promoting and advancing the best folks. You may not be able to reach below the next level to promote the most qualified, and place them in charge. Yet the future success of your organization dictates that you as a senior leader identify and keep an eye on your horses or your “Mavericks.” These people will win your future battles.

Identifying informal leaders can be a challenging task, and unless you the remarkable leader totally in tune with all the members of your team, you may not really know who your real “horses” are. It can be harder the higher in the organization the leader is because he or she you must juggle between answering to your boss’ and passing the word to your own directors or mid level functionaries. You are simply too busy putting out big fires to notice the real workers. When your supervisory duties lead you to manage any more than about 100 people, your ability to know each and every individual becomes more difficult. If you rely solely on your key supervisors to provide solutions and use their people, you may be making a mistake

For better or worse, intermediate supervisors often get the credit for meeting the goals as they have the boss’ ear or garner most of the face time. In fairness to today’s leaders, many intermediate level supervisors, especially the great ones, who are on their way up the corporate ladder, are good at sharing the credit. But often times, undue credit is taken and the real genius is often overlooked. Large organizations breed politics and bureaucratic in fighting. Sometimes a person is so good that a leader, motivated by jealousy, threat to his or her own job, ego, or simply a desire to continue producing positive results will keep the subordinate sequestered in fear of losing him or her to another division or organization. Some folks will prevent their best workers from moving up because of their perceived value to the organization. As the leader of any organization you must be aware of this reality.

Now, if you lead in corporate America please don’t dismiss the war fighting analogy. You fight a strategic battle everyday for the newest innovation, the next level of sales, or the goal of raising the stock price to satisfy the shareholders. It is simply battle in a different form. 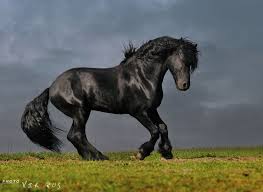 So lets ask the question again, “Do you as a leader know who is the best prepared to take your organization to war, or lead the team into the newest market segment? Do you know who your real horses are?” In other words if you had to take your team to war tomorrow, who would you want right behind you as you lead the charge?

Here are a few suggestions that I learned mostly by making more than my share of mistakes:

Leadership and management is an art form. As a leader, you need to maximize the ability of every person in your organization. But the higher you go in your organization, and the more people you manage makes it harder to know whom the real workers are. The top ten rules are only suggestions, or tools in your own vast tool chest.

Perhaps your best tool as a supervisor is to ask yourself and your immediate subordinates, “If we had to go to war tomorrow, and you couldn’t take everyone, whom would you choose to take with you?” Identify your horses; recognize both their strengths and their limitations. Know whom your team needs to function, and then lead from the front trusting that they have your six o’clock position secured.

Photo of Maverick, as portrayed by Tom Cruise from “Top Gun”(1986), alongside Tom Skerritt (Viper).

In the end Maverick’s tactics and flying skills, validate Viper’s trust in his abilities. He splashes enemy fighters, saves his wingman’s butt, and keeps the attack from reaching the carrier, but not until he has learned the painful lessons of being a wingman at Top Gun school. We should all strive to know who are horses are, maximize their abilities to get the job done and earn the right to say, “Bullshit, you can be my wingman.”


He invites you to join him for a few laughs and an occasional nugget of wisdom on Facebook, follow him on Twitter, or simply ignore him.
Tags: art, culture, Leadership, lessons, organization, Top Gun