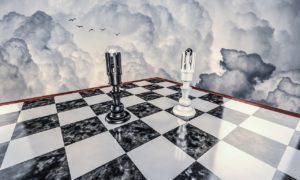 Students of leadership are no strangers to the concept of situational leadership. It’s a leadership theory developed by Paul Hersey and Ken Blanchard that essentially states that there’s no single “best” style of leadership. Instead, the most effective leadership style is one that is both task-relevant and is tailored to the ability and willingness of those the leader is attempting to lead.

I know that in the quarter century of leadership practice I’ve been involved in, situational leadership is more than just theory. I’ve experienced the ups and downs of applying leadership styles to influence my teams and the people within them. When it comes to influencing individuals or groups towards action, their willingness plays a greater role than their ability.  Where as abilities can be developed with training and time, willingness takes time to cultivate.  Without your team’s willingness to follow, it won’t matter how much training you perform.

One component of psychology that plays an important part in generating willingness is intelligence. Motivation plays a part for certain, but the spark we know as motivation comes from somewhere, and it comes from a person’s intelligence.  Or more appropriately, from thier intelligences.

I’m an engineer, and having worked with and around them for two decades I know that by and large, they are intelligent people.  They show aptitude and strength in mathematics, the sciences, and analytical thought.  In contrast, musicians, top athlete’s, and writers exhibit strengths in the creative, physical, and written arenas of human achievement.  These obvious facts illustrate that humans have the capacity to embody different types of intelligence.  This observation has been studies, with theory highlighting that each of us has more than one intelligence within us. Understanding what these intelligences are can be a key to unlocking untapped potential in our personal and professional lives.

It can also play a key role in how effective we are in influencing the willingness of our team members to follow our lead.

Back in the 1980‘s Dr. Thomas Gardner proposed the theory of multiple intelligences to analyze and better describe the different aptitudes exhibited by people.  His theory was that the standard aptitude test, the IQ test, didn’t accurately capture the intrinsic skills of a person.  To better define these skill-sets, he identified eight separate intelligences that include: 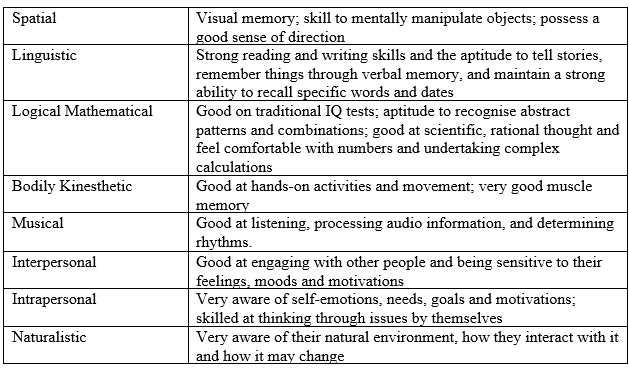 Each of us typically has a preference for using one or two of these intelligences. Because of this, it’s important when leading a team to determine what intelligences are present in each person.  This is important for two reasons:

You may have an engineer, an accountant, or a marketing professional working for you who apply their logical-mathematical and linguistic intelligences to further your project.  However, since each of these people is relying on more than one intelligence to perform their work, there will be untapped potential in their other intelligences that might lead to unique solutions to problems you collectively face.

Leadership in any organization is critical and it doesn’t take a study to prove this fact. However, the process of identifying and then developing leaders isn’t as clear cut. A 2015 report from Development Dimensions International revealed that only 40 percent of companies feel that the quality of their leadership is high. The same report stated that only 15 percent of organizations feel they have a strong line-up of leaders.  These less than stellar numbers indicate one thing: leadership in your organization likely needs to improve.

This being the case, how can you apply Gardner’s theory of multiple intelligences to improving both yours, and your organization’s leadership?

Figure Out Your Intelligences.  There’s general agreement amongst contemporary leadership theorists that the different types of intelligences are vital for effective leadership. Their studies point to the need for a blend of the hard and soft intelligences for someone to influence others towards a common objective. My own empirical evidence is that it takes more than hard intelligence (e.g. logical mathematical) to get across to people, even in a technical field such as engineering.  It was my soft intelligences (e.g. linguistic or musical) that were the most important to my effectiveness in leading others.

So to start, take some time to assess what intelligences you rely on.  For example, I have a strong logical mathematical intelligence, but I also rely on heavily on my musical and linguistic intelligences and to a lesser degree, intrapersonal intelligence.  Knowing this, I look to tailor my leadership styles to capitalize on these strengths.

Tailor Your Leadership. The goal of figuring our your and your people’s intelligences is that you can use this knowledge to apply your situational leadership skills to influence your people according to their exhibited intelligences. Knowing how they approach stressful situations, how they deal with ambiguity and what each person taps into to accomplish their work can give you knowledge on how best to motivate, influence, and guide the team both in the aggregate and the collective.

Leverage The Intelligence.  I think the most important take-away from the theory of intelligences for a leader is this: the multiple intelligences of your people is an innovation and creativity bonanza.  The need for innovation and creativity in organizations across industry’s is enormous, but the resources needed to tap into outside consultants or even inside subject matter experts often doesn’t exist. If each person in your five-person team relies on just two primary intelligences each, you have the possibility of up to ten different combinations.  Even in a team of five engineers with their strong logical mathematical intelligences, you’re still able to have different perspectives based on each person’s reliance on other intelligences.  This diversity can be harnessed into solving problems from a different perspective by asking each person to specifically look at it through the lenses of their secondary or tertiary intelligences.

Take some time to identify where your intelligences reside.  This is a useful exercise, as it may highlight that you’re putting time and energy into areas that do not resonate with your true skills – i.e. you’re outside your comfort zone because you’re being called on to apply yourself in an area in which you have no skill!  You may also identify that you’re not putting time and energy into developing and leveraging the intelligences that you do have, allowing them to atrophy.

Doing this simple exercise will give you added insight into what makes you tick and how best to leverage the skills and aptitudes that make up who you are, and this will make your personal and professional lives more enjoyable and successful.