V is for Visionary Leadership: Move the Ball Down the Field 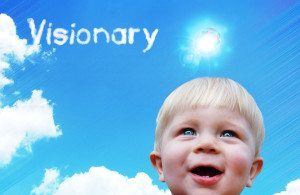 “Never tell people how to do things. Tell them what needs to be done, and they will surprise you with ingenuity.”
General George S. Patton, Jr.

V is the next letter on our journey through Servant Leadership. V stands for visionary leadership: applying common sense and empowering your people to create an environment of continual improvement. You’ve probably heard Lewis Carroll’s quote from Alice in Wonderland, “If you don’t know where you are going, any road will get you there.” As a leader, that outcome simply isn’t acceptable as you need to chart a course for your organization’s success…you need to move the ball down the field! I was reminded of this simple truth recently when I was mentoring a young officer about a trip we were planning. I mentioned the importance of getting my vector first to make sure we were headed in the right direction…in the end it saves a great deal of time and energy. Her response, “Yes Sir, your job is to give the vision and the vector so we can move the ball down the field.” What truth and wisdom in that young Captain’s words (and trust me, I didn’t pay her to say those words).

One of my favorite films is Remember the Titans because it is full of leadership lessons. If you’ve seen this movie, you likely remember the scene when Rev is injured after taking a cheap-shot hit from the opposing team. Coach Boone walks over to Sunshine and gives him the news he is going into the game. Initially intimidated at the opportunity, Coach Boone provides Sunshine the required vision to get him moving when he shares, “Your team needs you tonight. You’re the Colonel. You’re going to command your troops!” This encouragement was all Sunshine needed to gain the confidence to lead the Titans to victory by literally and figuratively moving the football down the field.

Apply Common Sense: The quality movement has taken the business world and, increasingly, the government world by storm. I experienced the quality approach early in my career and can remember the excitement as we improved a process for performance reports. Sure we used fancy tools, names, and concepts such as Six Sigma, fishbone charts, and brainstorming to name just a few. However, my key takeaway was that quality is simply applying common sense to a problem to make improvements. That lesson has served me well as I’ve seen over and over again the power of applying common sense to a problem or process and finding ways to create a culture of continuous improvement. It was clear to me that common sense prevails. I don’t buy into the phrase “common sense isn’t so common”.

Empower Your People: To unleash that common sense, you must empower your people to do great things. As a leader, you must recognize the wonderful strengths and attributes of those wonderful people you serve with, particularly younger members who come into your organizations with a fresh set of eyes, a different perspective, and a skill set much more advanced than those of us in “more mature” generations. I used to joke with my Airmen about how smart they are compared to my generation when I came into the Air Force. They have more computing power in their iPhone than most corporations had in their entire IBM mainframe 20 years ago and more importantly they know how to use it. I jokingly told them that as they do amazing things with the technology in the palm of their hand, I am still figuring out how to spell Facebook!

Create an Environment: A leader must create an environment where the organization can excel as they strive towards the vision set by the leader. I have frequently witnessed firsthand the strength of empowerment by creating the right environment. I will quickly share just one such story that clearly demonstrates what motivated people can do when they are empowered.

A few years ago, an Operations Support Squadron under my leadership was very excited about an initiative they were developing using an iPad to convert a traditional paper-based cockpit to totally electronic cockpit. I was very impressed with their plan and worked with my senior leadership to designate our team as the lead unit for developing this concept for Air Mobility Command, and then I turned them loose.

Fast-forward two years and the team was selected as the Chief of Staff of the Air Force Excellence Award winner for their transformational efforts! Their initiative resulted in eliminating 70-90 pounds of paper per crewmember and saved $770,000 in fuel weight per year. This innovation boasts an overall savings totaling $2.54 million per year in total costs.

Those impressive savings don’t even capture the more important reality; this team created a whole new paradigm by using common sense to adapt technology in a creative and meaningful way. That is the strength of empowerment.

I encourage you as leaders to create the vision, communicate the vision, and then empower those you lead so they can fulfill the vision and move the ball down the field. This technologically savvy generation is full of great ideas just waiting to be unleashed. General Welsh, Chief of Staff of the Air Force, recently talked about empowerment at the Air Force Association Air and Space Conference. He opined:

“We’ve got to empower our airmen better than they’ve ever been empowered,” Welsh said. “They’re remarkably capable and they don’t feel empowered, they don’t feel like they can make decisions or make suggestions because they don’t think that anybody would listen to them. We’ve got to change that. If we don’t, we’ll fail.”

When you think about visionary leadership think of the word WIN: Welcome new ideas, Inspire those around and Navigate to success! Visionary leadership is simply a must for today’s leaders as you develop a picture of where you plan to take your organization in the future. Don’t rest on your laurels, don’t buy into the lie that status quo is good enough. You must have the foresight to set the course and then the character to get out of the way as your people deliver that vision in amazing ways.

Be a visionary leader and WIN!

Author at GeneralLeadership.com
Major General James Vechery is a loving husband and a devoted father of three who serves in the United States Air Force. Born and raised in Maryland. Jim attended the University of Maryland where he graduated and was commissioned in the Air Force in 1988. A pilot by trade, Jim, known to many as “Vech”, has a background as a T-37 Instructor Pilot at Undergraduate Pilot Training, and also flew the C-5 Galaxy, KC-135 Stratotanker, and C-37. Major General Vechery commanded the 912th Air Refueling Squadron at Grand Forks Air Force Base, North Dakota; 22d Air Refueling Wing at McConnell Air Force Base in Kansas, and the 60th Air Mobility Wing at Travis Air Force Base, California. He currently serves as the Director for Logistics, U.S. Africa Command, Stuttgart, Germany. He is the principal logistics adviser to the Commander, U.S. Africa Command, and is responsible for executing all DOD logistics activities in the 53-country U.S. Africa Command area of responsibility, with a particular focus on deployment, distribution, supply, medical, contracting, and engineering.
Tags: empowerment, Leadership