Anarchy in the Workplace 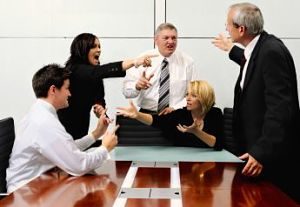 What do you think of when you read the title? Do you think of an organization that lacks regulation, rules and policies, and a requirement to gather a large amount of information to be analyzed before making a decision? After reflecting on a recent book I read and a sermon I heard, I propose that Anarchy in the Workplace could be a result of regulations, rules, policies, and too much information.

When I took command of my military unit, one of the primary goals was creating more projects and work opportunities for the unit members. In order to accomplish this, I wanted to create an environment where my unit members feel empowered to explore possibilities and make decisions on their own. During our first drill role call meeting, I presented a flowchart. The flowchart was based on the service core values and created an outline for how decisions should be made. The chart has three questions. The first is, “Is this decision/project within the regulations and instructions of the service and the National Guard?” (Integrity). The second is, “Is this decision/project in the best interest of the service, the Unit, and the Unit members”? (Service Before Self). The third is, “Can the unit meet the project requirements and timeline required by the customer or requester?” (Excellence In All We Do.) The last bubble on the flowchart says, “If the answer to any of these questions is ‘no’, this does not mean that we don’t pursue it, we just need to discuss it before making a final decision.” The purpose was to create a lane for the member to work in where the member felt empowered to take advantage of opportunities and move forward. Within the context of my unit, this has been successful.

Recently, the associate pastor at my church presented a unique take on Anarchy during a sermon on legalism. He referenced that he had heard a line from a radio host (I know I am referencing a pastor who anonymously referenced someone else, apologies for the poor reference) that discussed how Anarchy could arise from too many rules. Most times, one rule leads to another rule to clarify that rule. The result is that even well-meaning persons will be required to break the rules, in certain instances, to get things done. This leads to people deciding which rules are real rules and which ones are not….Anarchy. I made a connection between this thought and context to the state of policies and procedures in many organizations.

I recently read the book Blink, by Malcolm Gladwell. The author’s premise is that your first inclination, when it comes to making a decision, is your best option for reasons that are too complex to understand. He sites examples where your reliance on your senses and split decisions may be better than a well thought out and researched decision. Gladwell proposes that too much information can cloud judgment and cause people to make decisions that are not as optimal as their first inclination.

My favorite example comes from the chapter entitled “Paul Van Riper’s Big Victory: Creating Structure for Spontaneity.” The chapter describes a war game organized between a Joint Military Team and an assigned “Red Team” or adversary. In the usual fashion, the Joint Team spent a lot of time gathering reams of information, developing very detailed operational plans, and had a scripted approach to a battle that was projected to result in a quick and sure victory. The Red Team was led by an accomplished Viet Nam era leader who was known for relying on his instincts during battle. The Red Team leader gathered his team. He gave his team general orders and guidelines to follow. He then instructed them to use their best judgment and react to the game scenarios as they arose. Not very long after the war game started, there were 16 U.S. ships at the bottom of the ocean. When the Red Team leader was approached by the Joint Team to find out what his strategy, they were shocked to find out that the team was given the flexibility respond to the game and had independence to make decisions. The result appeared to be that the Red Team operated as a highly adaptable, highly responsive team that was able to subvert the plans and strategy of the Joint team. Paul Van Riper, the Red Team Leader, summarized it this way, “They were so focused on the mechanics and the process that they never looked at it holistically. In the act of tearing something apart, you lose its meaning.”

Is there Anarchy in your workplace? Are the rules, policies, and procedures imposed upon members restrictive to the point where rule breaking is required to be effective… Anarchy? How would the workplace improve if the members were empowered and had the flexibility to make instinctive decisions that were best for your organization?

Author at GeneralLeadership.com
Todd Hirneisen is an educator and military leader. Todd has been a high school teacher and coach for 20 years and is currently the Commander of the 235th Civil Engineer Flight, Maryland Air National Guard, Baltimore, MD. He is a student of organizational leadership and seeks to expand his capabilities through leadership experiences, academic opportunities, and by providing insights from his experience. He lives in Gettysburg, PA with his wife, Rebekah and his three children.
Tags: anarchy, conflict, flexibility, Hirneisen, Leadership, restrictions, rules, Workplace