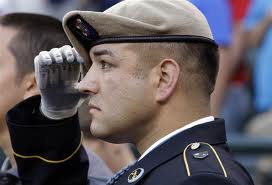 First say to yourself what you would be;
and then do what you have to do.
Epictetus

Picture the scene: In a remote part of Afghanistan, near the mountainous border with Pakistan, helicopters carrying dozens of elite Army Rangers race over the rugged landscape. Their target on this high-risk mission is an insurgent compound. It is broad daylight and the Rangers know the insurgents are heavily armed. But it’s considered a risk worth taking as reliable intelligence sources indicate a top al Qaeda commander is in that compound.

Within a matter of minutes, the helicopters touch-down and the Rangers immediately come under fire. One of the American soldiers who emerged from the helicopter that day was Staff Sergeant Leroy Petry. Seeking cover, Petry and another soldier pushed headlong into courtyard with high mud walls. And that’s when the enemy opened up with their AK-47 assault guns.

With that selfless act, Leroy saved his two Ranger brothers. But his valor came with a price.

It is a well-established fact that we look to others for guidance on how to do everything from resolving conflicts, to building our businesses or pursuing our dreams. For example, long before he ever became a Beatle, John Lennon idolized many of the old rhythm and blues greats, people like Chuck Berry and Muddy Waters. He had their pictures on his wall and used them as inspiration when he first began playing the guitar.

Never Forget: We Are All Role Models

We must never forget that we are always serving as role models to others. No matter who you are, where you work, or what title, position, or rank you possess, you will leave your mark, for good or bad, on scores of people. Helping us all to understand why role modeling is the most powerful message we will ever send to those around us.

We must never forget that we are always serving as role models to others.

Sociologist Ernest Becker writes, “Man will lay down his life for his country, his society, his family. He will choose to throw himself on a grenade to save his comrades; he is capable of the highest generosity and self-sacrifice. But he has to feel and believe that what he is doing is truly heroic, timeless, and supremely meaningful.”

Becker reminds us that achieving true happiness and satisfaction in and through our lives demands we pursue goals that are relevant, honorable, and extend above and beyond ourselves. Life cannot be merely about us. If we want to thrive as citizens and as a nation, we must get back to basics. We must rediscover within ourselves that the most powerful tool we have to begin improving things in our surroundings is the example of how we live our lives—it’s just that simple.

…the most powerful tool we have…is the example of how we live our lives!

How might things change in our world if hero worship didn’t disappear with adolescence? What if taking notice of those particularly remarkable people in our lives helped remind us of the value of setting an example worth emulating? So please never forget that heroes aren’t limited to famous generals or comic book characters. They’re humans like you and me with flaws and frustrations—everyday people who choose to be something more by engaging when others won’t and serving when others don’t—inspiring everyone around them to consider doing the same.

So my advice to you is simple: choose your heroes and role models wisely, and let them lift you to heights you would not otherwise rise to on your own.

Co-Founder & Senior Curator at GeneralLeadership.com
John E. Michel is a widely recognized expert in culture, strategy & individual and organizational change. An accomplished unconventional leader and proven status quo buster, he has successfully led several multi-billion dollar transformation efforts and his award-winning work has been featured in a wide variety of articles and journals, including the Harvard Business Review. In addition to serving our nation as an active duty General Officer in the United States Air Force, John enjoys helping people learn to walk differently in the world so they can become the best version of themselves possible. He is blessed to be married to the most patient person on the planet and together, they have two amazing sons. You are encouraged to learn more about John at his website, www.MediocreMe.com
- Contact John Michel via email ( [email protected])
- Military Biography
Tags: Afghanistan, Army, battle, becker, choice, happiness, Heroes, John Lennon, meaning, michel, petry, Rangers, role models, satisfaction