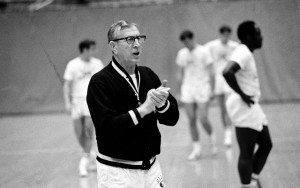 Outnumbered and seemingly outclassed, Brigadier General Daniel Morgan led a force of militia and Continental regulars in masterfully enveloping a British force led by Lieutenant Colonel Banastre Tarleton.  The most impressive aspect of the battle wasn’t the genius of the maneuver, but Morgan’s ability to project his vision in the mind of his subordinates, and convince them they were capable of carrying it out. The leadership style Morgan used (coaching) would be familiar to anyone who’s ever studied or been part of an effective team.

Accounting for the militia’s tendency to break at the sight of a disciplined British line, Morgan urged the militiamen to fire just three volleys, and then run behind the regulars positioned out-of-sight behind a hillcrest. Because the Continentals expected to see the militia running, they would avoid panic and patiently wait for the British. Morgan realized the sight of the militia turning to run would cause the aggressive Tarleton to push after them, only to be drawn into a trap of devastating fire.

“…coaches understand that getting people to see themselves differently, both as a team and as individuals, is the gold standard of leadership.”

Morgan spent the night before the battle circulating among the campfires, encouraging and inspiring his men, explaining how they each fit into the plan.  In the end, Morgan’s men, who should have been no match for their opposition, suddenly acted like the world’s finest fighting force and routed the British. For me, Cowpens is a story of how good coaching makes people respond in the most challenging situations.

Of course, coaching as a leadership style is as effective in the workplace as it is on a field of contest. According to the Harvard Business Review, “The single most important managerial competency that separates highly effective managers from average ones is coaching.”  Not surprising. However, relatively few leaders either see themselves as a coach or use coaching techniques with their employees. As a result, it’s not uncommon to find leaders who can motivate and inspire, but don’t get the very best out of their team. From my personal experience and observations, the difference that leads a team to their highest potential comes down to adopting three important techniques common among great coaches.

Invest time to develop people.  A good coach eventually becomes both an expert on human nature and on the nature of the individuals on a team. This only comes through frequent, in-person communication—not policy memos, emails, staff meetings, or social media. Coaching means listening. Knowing your employees, and how to best develop them, starts with knowing what goes through their mind.

Provide honest feedback. Put simply, coaching involves getting people to think about things they normally wouldn’t. That could mean showing employees how to correct flaws or build on successes, or helping them see path to overcoming challenges they may not see on their own. A good coach is always focused on what more a team and its members can do. They communicate in a way that gives their team pride in their accomplishments, but makes them want to go further.

Change the way people think. Coaching involves convincing a team they have the responsibility and capability to solve the toughest of problems…even when a problem is not in their “lane.” This happens when a coach gets a team to see things systemically, and by showing them the power that comes from communicating and integrating proactively. This enables leaders to eventually create “buy-in” when their employees consistently see a “win” from efforts.

When leaders apply these techniques, a team begins to look at themselves differently, which often leads to amazing results. Daniel Morgan convinced his team they could defeat the finest troops. Herb Brooks convinced the 1980 USA men’s hockey team they could beat the Soviets. And across government and the private sector, leaders who coach are convincing teams they can tackle the biggest of challenges on the path to success. In each case, these coaches understand that getting people to see themselves differently, both as a team and as individuals, is the gold standard of leadership.

Author at GeneralLeadership.com
Jason M. Brown is a senior leader with over 20 years of military service, including 8 years living abroad. During his career, Jason developed and coordinated policy for senior government officials, managed multi-million dollar budgets, and led units engaged in combat operations. He has extensive expertise in European, Mediterranean, and African security issues. Jason has commanded at the squadron and group level and is a graduate of the USAF Weapons School, USMC School of Advanced Warfighting, and Air War College. He has written for Joint Force Quarterly, The Best Defense (Foreign Policy), Air and Space Power Journal and other publications.
Tags: coach, example, Jason Brown, Team, Wooden