Confrontation From A Fruit Fly’s Perspective 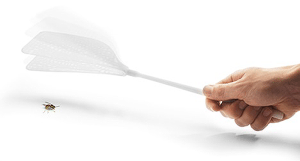 There are over 5,000 species of fruit fly in the tephritidae family, each with unique properties. So many species, in fact, biologists have made it a favorite pastime to analyze the tiny creature in the quest for advancements ranging from ecology to neurobiology. The variations span the gamut of evolutionary differences, each having come into being via environmental necessity. One recent discovery is the G. Tridens species, its wings bearing a striking resemblance to ants, complete with legs and large eyes. Scientists theorize the markings are meant to confuse and intimidate predators, making them go away. While this isn’t nature’s only example of “shock and awe,” it is worth noting due to the amazing detail of the image seemingly silkscreened across the glass-like wings.

Chances are you know a few G. Tridens in your life: people who have developed unique skills to confuse and intimidate Teammates, into a fight-or-flight mentality (with hopeful-focus on the latter). This is a learned behavior, borne of consequences and observed through modeling. Regardless of the inception, the resulting reaction helps the “human fly” to avoid confrontation and buzz-off to safer environments of their own choosing.

Swat this behavior on your team through direct engagement, or expect the trait to multiply like fruit-flies on a banana. Three simple actions can be the difference in dealing with this pest in your environment:

1) Prepare for Engagement, Expect Positive Outcomes: Not every confrontation involves a fight. Mentally prepare by seeing the world through your Teammate’s eyes—seek to find the values they are guided by and the outcome they fear or desire. In “The Art of Woo,” G. Richard Shell & Mario Moussa point out that “True victory…is when you don’t have to fight and you can still win.” Understanding the “why?” behind behavior can be critical to preparing for the “how?”

2) Confront in Private, Don’t Pluck Wings: Nothing sets a confrontation back faster than public humiliation. Choose a private and neutral environment that allows seeing each other on more even terms away from prying eyes. Vince Lombardi recounted an event with the Green Bay Packers that changed his leadership style…forever. After observing a bad pass, Coach Lombardi provided an exceptionally profanity-laced commentary in the locker room to Bart Starr, his quarterback. Starr shared that he was expected to lead the Team, but that was undermined when the head coach belittled him in front of the Team. Five later titles together over eight seasons are a testament to the learning moment that Coach Lombardi took away from that moment. He never criticized in public again.

3) Be Constructive, Set the Tone: Remember the reason for the moment, and recall your preparation. Be prepared, however, for surprises. German Field Marshal von Moltke once lamented that “No campaign plan survives first contact with the enemy.” In this case, it’s not an enemy in front of you: it’s a Teammate. Expect some squirming, so make it a point that your intent is for them to fly again another day—but only in a positive direction which benefits the Team. 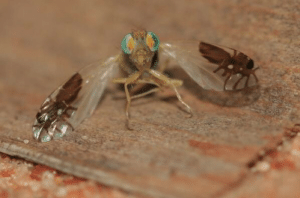 Nobody enjoys conflict. If they do, expect a pathological reason behind it. Leaders find it necessary to confront poor behavior when it happens, if only to prevent poor modeling from becoming a repeatable trend within the Team. Take a lesson from the tiny fruit-fly and apply it to your interaction within your Team. Camouflage and deception cannot be allowed to become effective blockers to good communication. Shoo these traits away through engagement, preparation and constructive collaboration and watch your team evolve to a higher species!

Matthew T. Fritz is a leader and mentor in the field of complex organizational change, emotional intelligence, and organization strategy. A successful DoD senior-acquisition program manager and test leader, Matt has earned documented success in the areas of test and evaluation, assessment, technology development and flight operations. He has specialized experience in cost, schedule and performance management and is an active duty Field-Grade Officer with command-experience in the United States Air Force. Matt is also a certified acquisition professional, as well as a certified Emotional Intelligence Trainer/Practitioner. He is the Author of an instructional book entitled, “Leveraging Your LinkedIn Profile for Success” and actively blogs with other military leaders at GeneralLeadership.com, as well as his personal blog at AdvancedVectors.com.
Tags: collaboration, Communication, confrontation, Team