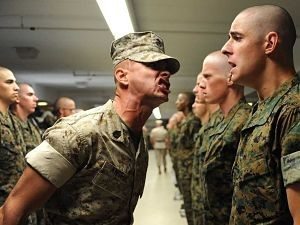 “Maverick you just did an incredibly brave thing.  What you should have done was land your plane…. your ego’s writing checks your body can’t cash…. Remember one thing…. you screw up just this much and you’ll be flying a cargo plane full of rubber dog crap out of Hong Kong.”  Commander Tom “Stinger” Jordan

When we last left our Top Gun series we saw Maverick and Goose receiving a series of “counseling sessions” from their commanders.  The style of delivery, while vastly different, can be seen as equally effective.

The thrust of General Leadership has always been to promote a positive, affirming servant-leader style.  But in the course of your life as a manager, you will almost certainly be faced with a situation that requires firm, immediate, and yes, lets say it, “Corrective counseling.”  This timely feedback may save a life, your company’s bottom line, or an eroding morale.

And lest you think that “butt-chewing 101” is limited to the military, I have seen temper flares in civilian industry that exceeded any I ever I saw in the military.  Some of industry’s greatest CEO’s have been notorious for their tirades.  The brilliant Steve Jobs was legendarily demanding.  Yet as his company foundered on the rocks, he himself was fired from Apple, the very company he founded, by a board of directors he had hired and viewed as father figures and mentors.   I wonder how it must have felt to “fire” Steve Jobs, the founder of the company.  But look at the result of this corrective behavior: Jobs returned to lead Apple with the iconic I-phone, forever changing the face of the technology industry.

“Always remember that counseling needs to be done with a specific purpose in mind: to correct errant behavior that is illegal, immoral, unethical or deleterious to the proper function of an organization, or to provide a timely “course correction” to keep your organization going in the proper direction.  A gratuitous yelling session may establish one as an egotistical, power hungry jerk.  At best, it will take away from the leader’s own organizational effectiveness.  At worse it may open one up to workplace complaint or lawsuit.

So “talk to me Goose.”  Lets address “Stinger” Jordan’s style.  He is definitely fits an  “old school” style in giving Maverick a cigar-chomping, take no prisoners, full throated a##chewing, liberally laced with invectives harkening to fear, ridicule and sarcasm.  He is pretty good at this style, and it is authentic.  There is a method to his madness. Stinger tries to avoid making this about his personal power or his own self-serving ego, but rather delivers his speech with a significant amount of organizational power to back up his ultimate threat.  His counseling is about Maverick’s performance.

I take exception to his reference to Maverick’s father, as this is an attack on the person, not the behavior.  Outside of Hollywood, we should avoid personal invectives, but in this movie that reference is critical to the plot line.  While a family insult is normally out of bounds, Stinger knows that this is Maverick’s hot button, so he probably sees it as a key to Maverick’s “showboating” behavior.

Now lets look closely at how the counseling is administered.

One might think that this scene is totally Hollywood fiction, and of course, it has been glamorized for maximum effect.  But I have been the recipient of counseling sessions that were very much like this.

Some twenty years ago I had a commander who was, and still is one of the finest gentlemen I have ever known But on one occasion, he demonstrated a red faced, shouting, mouth frothing, table-pounding butt chewing that took all of his subordinate group commanders, totally by surprise.  After he stormed out of the room, we put our heads together and came up with a reasonable solution to the problem that faced our organization.  His secretary who had heard the full tirade was surprised as he strode by her desk and stopped with his patented smile and said, “How is your day going?

You see, sometimes you must put on a game face and deliver bad news or corrective action to preserve your organization and to reinforce standards.

Every leader must have his/her own style.  It must be genuine.  If you, as a leader, enjoy spirited discussion and direct confrontation with subordinates the “butt chewing” may come pretty naturally.  If you are a more easy going person, not comfortable with confrontation, you must give some real thought to what your corrective counseling style is or should be before it happens.


He invites you to join him for a few laughs and an occasional nugget of wisdom on Facebook, follow him on Twitter, or simply ignore him.
Tags: butt chewing, corrective-action, gene reedman, Leadership, Series, Top Gun