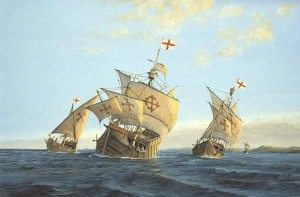 It’s a seldom discussed fact that Christopher Columbus nearly missed his chance to make the history books in his 1492 discovery of the “New World.” Had his ship sailed on yet one day longer without sighting land, they would have turned around and headed back to Spain on the 12th of October. The truth is, he had a slight followership problem to contend with—and his own deception nearly cost him historical immortality. Along the way, his crew had grown unruly and restless, which prompted him to start “cooking the books” and keeping a separate set of records: one for his eyes only and the other he shared with his crew. In his own book, he kept the true numbers—the immense distance they had travelled across the sea—while the other book was used to pacify the crew into thinking they hadn’t strayed too far from home. On the 67th day (9 October), he promised his crew that they’d turn back if they hadn’t spotted land within three days. Fortunately for him, his deception worked (barely) and he sailed straight into the history books and onto the calendars each year marking the day of their great find.

Such risky behavior, however, rarely works out so well. In fact, leadership integrity is often easily sold for hollow prices, only to leave the seller empty handed. Rather than deceiving the team on their way to greatness, consider the value of sharing the voyage and seeing how much more productive each teammate can be! In their book, Switch, the Heath Brothers share the value of creating a “destination postcard” for teams: “a vivid picture from the near-term future that shows what could be possible” as a way to direct the “Rider” and motivate “the Elephant.” (If you have no idea what I’m talking about, you should really read this book!) In Built to Last, Jim Collins and Jerry Porras called this type of aspiration a “BHAG” (or “Big, Hairy, Audacious Goal). They proposed that setting such goals distinguished the companies with staying power from the ones who were less successful. While it is sure that Columbus’s crew knew they were going after a goal that was (at the time) considered impossible, how much more successful might the voyage have been had they been honest with each other about their course and progress?

In the end, we’ll never know what might have been different had this leadership rouse not been successfully implemented. However, we can take away an understanding that such trickery is seldom profitable when dealing with teams in our “new world” where failure is only an iPhone snapshot away from being front-page CNN news. The Wall Street Journal makes regular front-page fare of those who miss the mark and fail to maintain their integrity for their company, their shareholders or their teams.

Leadership is a team sport—it takes effort and understanding from all sides. Chart your course to distant horizons with the knowledge that many hands make light work…and clearer vision is gained when everybody is aware of the progress.

Matthew T. Fritz is a leader and mentor in the field of complex organizational change, emotional intelligence, and organization strategy. A successful DoD senior-acquisition program manager and test leader, Matt has earned documented success in the areas of test and evaluation, assessment, technology development and flight operations. He has specialized experience in cost, schedule and performance management and is an active duty Field-Grade Officer with command-experience in the United States Air Force. Matt is also a certified acquisition professional, as well as a certified Emotional Intelligence Trainer/Practitioner. He is the Author of an instructional book entitled, “Leveraging Your LinkedIn Profile for Success” and actively blogs with other military leaders at GeneralLeadership.com, as well as his personal blog at AdvancedVectors.com.
Tags: BHAG, Built to Last, CNN, Collins, Columbus Day, Communication, fritz, goal setting, Goals, Heath Brothers, holiday, Integrity, Porras, standard, Switch, Wall Street Journal