Continuing the Mission – The First 100 Days 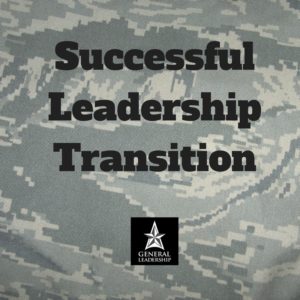 My first month as Mission Support Group Commander at the Air Force Academy was wonderful. Sure, there was work to do, but I spent the first few weeks touring the campus and meeting many of the 2,600 people who I led. There were plenty of awards to hand out, challenge coins to deliver, and interesting people to meet. When I was on horseback with the Academy Stablemaster touring the South Training Area, I thought to myself, this is the best command I’ve ever had! Of course, all honeymoons end and sooner or later a new leader has to stop being “oriented” and get to work. It certainly wasn’t going to be two years of kissing babies and riding horses through the Front Range.

The job of making a successful transition isn’t over at Day 30; in fact it’s only just begun. If your transitions are like mine, the first 30 days are the easiest.

During the remainder of your first 100 days is the time to build relationships with your new team and learn the organization thoroughly. It will also be time to deliver on the goals you set for the team. Spend time getting into the details, walk around your organization and learn the people and their issues, and be visible to them. Build on relationships you’ve established with your leadership team and work hard to forge new ones with as many others in the larger team as possible. I actually carved out time in my scheduled deliberately for visiting various work centers in my Mission Support Group and when possible, to work with them. Take that time to recognize high performers and learn if senior leaders are passing down your priorities and principles to the first line workers. People respect senior leaders who are willing to do the “dirty work” of the organization.

Those goals could be as modest as making a plan for later, or as ambitious as sweeping changes in the organization and products. Whatever your goals, and whatever changes you want to make in your team, once you announce where you intend to go focus your energy and organization on getting there. You’re credibility is now in play, but this is exactly why getting your team on board with you in the first 30 days is so important. Some organizations will need a firmer hand than others, but whether you’re turning around a failing organization or taking an already high performing team to the next level, you’ll need a team effort.

Once you reach the 100th day recognize your work is only beginning. As a senior leader your “grace period” is finally over–you’re no longer the “new guy” and you own all the successes and failures. If you’re turning around a failing organization it’s unlikely you made any significant progress in the first 100 days and they’ll be plenty of work left to do. A high performing team will be accustomed to you at this point, so it will be important not to let them rest on their laurels. Make adjustments in your leadership style and continue to lead from the front. A solid first 100 days will set the tone for the months and years ahead.

As an Air Force officer, Mickey has handled national portfolios totaling billions of dollars. He’s presented on dozens of topics to senior leaders in government, industry, state and federal government, and worked with international business and government executives and in a dozen countries in Asia, Europe, and the Middle East.
Tags: CEO, change of command, Executive, Know Your People, Leadership, Mickey Addison, take charge and move out, Teamwork, transition