The One Reason Why We Still Insist on Honesty 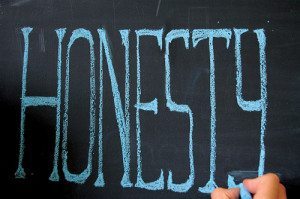 “Never separate the life you lead from the words you speak.”
Paul Wellstone

Americans seem to be split down the middle on every public issue that comes before them these days, with one possible exception. Honesty is important to us. History tells us this has always been the case, but the seeming inability to maintain the privacy of any communication has made it truer than ever. Leaders in industry, business, government, the military and even the church have learned this the hard way in recent years. In a society that seems to overlook and even reward the most outlandish behavior by its most prominent citizens, there is one reason why we still insist on honesty. Every society, every government, every business, every military organization, every church and every human relationship can only thrive where there is trust, and honesty is the foundation of that trust.

Think about this. When you drive a car away from a repair shop, when you step aboard a commercial aircraft, when you accept the diagnosis of a doctor and submit to a procedure or take a prescribed drug, when you pledge your life to someone and they say, “I’ll always be there for you and you alone,” you are operating on the basis of trust. Trust that they have done or will do what they have told you they will do—fly you safely to Houston, alleviate your suffering, perform repairs appropriately or simply stand by you in difficult times.

A few years ago I commanded a large military organization in which one of our subordinate units experienced a serious aircraft malfunction. A single-engine aircraft suffered a flameout in flight, requiring the pilot to maneuver the aircraft for several miles while conserving altitude and airspeed to accomplish a safe landing—an extraordinary feat of airmanship that could have easily resulted in the lost of both the aircraft and the pilot. The ensuing investigation revealed that prior to flight, individual mechanics had missed critical steps in repairing and preparing the aircraft for flight. Even worse, two echelons in the unit had certified in writing that the proper repairs had been accomplished.

A pilot preparing for flight walks around the aircraft looking for obvious discrepancies. Fuel and oxygen not serviced, tires worn beyond acceptable limits—those are obvious. But for the myriad of invisible repairs that may have taken place, the pilot relies on the honesty—the trustworthiness—of the individual who signs the aircraft’s maintenance records saying it is “good to go.” This incident was a significant breach of trust that could have been catastrophic.

To be fair, often these incidents that breech trust are not intentional. They simply represent human error with no malicious intent. But regardless of intent, such incidents erode trust that is difficult and sometimes impossible to restore. They indicate to the observer that an individual is not exactly how he represents himself.

Too often these situations are made worse when those involved try to avoid accountability. Several decades ago, an amateurish burglary and the subsequent resignation of a president added a new phrase to the American lexicon: sometimes it’s not the crime, it’s the cover-up that does you in. In some cases people err in ways that are neither illegal nor particularly harmful, but they can become so if not candidly acknowledged.

Every leader faces this challenge. When we are chosen to lead an effort or an organization, people make assumptions and have the expectation that you are honest. After all, they have in large measure put their well being in your hands. They trust that what you say is true to the best of your knowledge, that you will make every reasonable effort to deliver on your promises, and that when you do not you will acknowledge it.

Honesty is not an event— it is saying what we believe to be true, doing what we say we will do and owning it when we fall short. It is a choice that becomes our character.

Author at GeneralLeadership.com
Gen (ret) Roger A Brady served for over 41 years in the U.S. Air Force and retired as Commander, US Air Forces in Europe in 2011. He advises industry, teaches, speaks and writes on principled leadership and leadership development. His recent writings include a daily devotional book, a volume on leadership and articles on sexual assault and keeping faith with the men and women who serve in our armed forces. He lives with his wife in Raleigh, North Carolina.
Tags: character, honesty, Leadership, trust

Gen (ret) Roger A Brady served for over 41 years in the U.S. Air Force and retired as Commander, US Air Forces in Europe in 2011. He advises industry, teaches, speaks and writes on principled leadership and leadership development. His recent writings include a daily devotional book, a volume on leadership and articles on sexual assault and keeping faith with the men and women who serve in our armed forces. He lives with his wife in Raleigh, North Carolina.