Set the Example – Lead From the Front 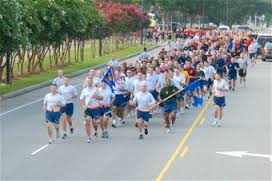 “Leaders don’t force people to follow, they invite them on a journey.”
Charles S. Lauer

Setting the example is a primary function of every leader. We speak of this 24/7/365 activity with statements like, “lead from the front, large and in charge, out front all the time, and on the front line to name a few.” I have always believed that being the example was my principle role; I had no difficulty exercising and demonstrating that responsibility.

There are times when leading boldly from the front is not the best practice and I also embrace leading from the middle and rear if and when needed. There are specific times, during certain activities, and specific roles where there is no question that out front leadership is the only way to ensure the end result that is expected.

One example that comes to mind is the change in physical fitness programs in the US Air Force. In July 2010, after a lengthy awareness, personal preparation phase, and required unit-fitness events acclimation, the Air Force started a mandatory Fitness Program. Until this time, there were AF fitness standards but there was not any real accountability, very limited personal responsibility, minimal consequences, and less than stellar concerted emphasis from leadership across our Air Force that this was a required piece of being a 21st century Airman.

When July 1, 2010 rolled around there was still strong opposition to getting on-board with this now requisite program, and even less enthusiasm for the mandatory testing regimen and specific personal responsibility to be in shape and ready for testing at all times.

Luckily, I had always been an OK physical fitness guy who used this activity to keep my mind and body stress-reduced and my resilience level high. I had spoken about it publicly and also ensured all of the Airmen I was responsible for were aware and engaging the new and coming reality.

As the new date crept closer and closer, I increased my messaging tempo on this program, articulated the strengths it would provide our forces, and espoused the health benefits for all Airmen. It was easy to connect it to the increased deployment tempo, the extended deployment periods into the austere environments of the deployed locations of Southwest Asia, and it was easy to show the need for this program and its medical benefits at this extremely financially challenged time in our Air Force.

On July 1, 2010, I was the senior ranking Chief Master Sergeant (E-9) on Tyndall AFB Florida where I was the Command Chief Master Sergeant of First Air Force. I scheduled myself in the first group of testing candidates and into the first available timeframe to be tested. I also ensured other leaders within our command and across the base were aware of this. I wanted them to recognize the critical importance of leading from the front on this program.

The truth of the matter is that you always know the right thing to do. The hard part is doing it.
General Norman Schwarzkopf

I also ensured that our unit PT representative was present when I tested so she could relay the “reality” of the testing regimen to others and when they asked who had done it already, she could use my name as part of that answer and I ensured she knew that she could share my results if asked. I wanted total transparency and I wanted them to know that leadership was bought in. I tested early in the morning on Thursday July 1, 2010 and had a great experience. I recognized some minor glitches in the execution of the local program and shared this feedback with the program officials, and I clearly recognized how good this program would be in the long term for our Airmen and ultimately our Air Force.

After returning to the office and getting my daily business accomplished, I took a few minutes and wrote an article for our organization website about the experience and again, espoused the AF Fitness Program and its benefits for Airmen and the Air Force. At this point, I believed that I had done all I could to lead from the front on this issue and I would have little resistance or opposition to it when I traveled to the bases within our command and spoke of it and observed their compliance.

I was met with enthusiasm and engaging physical training programs at the bases I visited. I witnessed leaders providing the resources and the program-required items for their Airmen’s success. What I recognized was lacking was that same leadership being out in front in the training and testing elements. When I spoke with the enlisted leadership, I stressed the importance of them being seen in training and testing by other Airmen. I would always do my exercise routine outside where others could see it while I was at their location and if possible, I would do a fitness test when the unit tested as well. I recall one month in 2010 where I tested 5 times in 5 different locations so Airmen could see their enlisted leader doing the same thing that was expected of them. I do not know if this made a long-term difference for that specific unit but I am confident that it did not hurt.

Providing a positive example and demonstrating the value and expectation of programs is an important piece of being an effective leader. Do you and your fellow leaders believe in this and do it as part of your leadership?

Author at GeneralLeadership.com
Joe is a dynamic and proven senior leader, educator, and mentor with progressive leadership experiences, continuous professional development, and engaged senior leader activity in both military and civilian organizations. He is principally focused on developing the next generation of leaders through creation, implementation, and longevity of effective professional development programs that capitalize on education, training, and experience with a foundation steeped in ethics, morals, and values. Joe has recent dynamic experience with change management specifically performing as an effective change agent for radical organization cultural change. Joe and his wife Kerry live in Dell Rapids South Dakota and they have two children and five grandchildren.
Tags: example, Leadership, Thornell