The Eagle: Symbol of Greatness 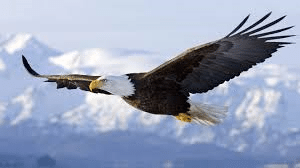 “You are a product of your environment. So choose the environment that will best develop you toward your objective…Are the things around you helping you toward success – or are they holding you back?”
Clement Stone

For thousands of years the eagle has served as the official seal of empires, leaders and strength. Fierce warriors have valiantly displayed the image of the eagle on their shields, on their banners, and on their uniforms.

In America, the eagle has great significance as a national symbol. More than two hundred years ago America chose the eagle as the image to represent our country. The eagle serves as the official seal of the United States, and its image appears on our currency. But why has this image been the choice of so many local, national, and international powers for so long? Perhaps, it is because the eagle is, among many things, a symbol of strength, keen vision, perseverance, commitment, and courage. Eagles are a rare species that possess the ability to overcome obstacles and soar above everyday life, who choose to undertake daunting tasks most would never even consider.

In the military, the eagle also represents many things – one of the most prominent being a symbol of leadership.

Tradition has it that in 1775 General George Washington set out to make Colonels readily identifiable to those in their charge, authorizing field officers who attained Colonel’s rank to add colored ribbons to their hats. In 1829, the military replaced ribbons with an image of the eagle, which they wore on their collars. This tradition continues to this day, as those serving this great nation and who are privileged enough to wear these eagles know they have been entrusted with much and understand much is expected of them.

With this brief history in mind, it is my great privilege to congratulate my good friend and co-founder of this General Leadership blog, Matthew T. Fritz (Monty), for pinning on his eagles of leadership this week. For over two decades, Matthew has successfully led in peace and war. Today, our nation and our military, is better for entrusting him with this next level of leadership opportunity and responsibility. As an anonymous writer once so eloquently shared, “A true leader has the confidence to stand alone, the courage to make tough decisions, and the compassion to listen to the needs of others. They do not set out to be a leader, but become one by the quality of their actions and the integrity of their intent. In the end, leaders are much like eagles…they don’t flock, you find them one at a time.” I could not agree more.

Congratulations Matthew. Your General Leadership family is immensely proud of you.

Co-Founder & Senior Curator at GeneralLeadership.com
John E. Michel is a widely recognized expert in culture, strategy & individual and organizational change. An accomplished unconventional leader and proven status quo buster, he has successfully led several multi-billion dollar transformation efforts and his award-winning work has been featured in a wide variety of articles and journals, including the Harvard Business Review. In addition to serving our nation as an active duty General Officer in the United States Air Force, John enjoys helping people learn to walk differently in the world so they can become the best version of themselves possible. He is blessed to be married to the most patient person on the planet and together, they have two amazing sons. You are encouraged to learn more about John at his website, www.MediocreMe.com
- Contact John Michel via email ( [email protected])
- Military Biography
Tags: Colonels, Curators, Eagles, fritz, History, Leadership, michel, Promotion, Symbols