Positive Change: Because That’s The Way It’s Always Been… 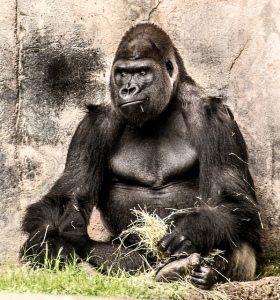 As leaders, we are charged with guiding our organizations to success. Whatever that mark of success may be be, it most definitely involves positive change. To be successful, we must question everything and never allow the mindset… Because That’s The Way It’s Always Been Around Here.

The best way to explain this to any organization is to present the gorilla experiment. This is a fabled story I have used many times. It has been handed down leader to leader, and I have been unable to determine the origin. It goes like this…

The experiment begins with five gorillas in a cage. In the center of the cage is a banana, hanging at the top of the cage just out of the gorilla’s reach. Below the mouthwatering banana is a ladder.

As one of the gorillas begins to climb the ladder toward the banana, all five gorillas are sprayed with ice-cold water. All of the gorillas immediately retreat to the corners of the cage at which point the water stops spraying.

After a short time, another gorilla began to climb the ladder and was stopped by the other four who did not want to be doused with water.

One of the gorillas is removed from the cage and replaced with a new one. As soon as the newby sees the banana, he goes for it. Enroute, he is attacked by the other gorillas. He has no idea why, but fully understands that he will be assaulted if he tries to climb the ladder.

A second gorilla is removed from the cage and replaced with a new one. Of course, the new gorilla makes a dash for the ladder and is attacked. The first newcomer joins in the assault, even though he does not understand the reason for it.

A third gorilla is replaced and the same events unfold, this time with the first two replacements participating in the assault with no idea why.

After the last two original gorillas are replaced, no gorillas who were sprayed with water remain. The new five, with no knowledge of why they should not approach the ladder, will never touch the ladder or make a climb for the beautiful banana. Why? “Because that’s the way it’s always been around here.”

In a similar fashion to the gorillas, we all naturally become accustomed to our standard, repetitive duties. When you are new to an organization, everything repetitive to others is new to you. Once you have been there a while, you do not realize how desensitized you become. The old methods of doing our duties are what yield continual inefficiencies and the mentality that resists change.
Just like our five gorillas being replaced, the military has an aspect most businesses do not: frequent 100% manpower turnover. Although many see this as a negative, an effective leader must capitalize on it. The welcome-aboard meeting with each new member of your organization should include this simple task: question everything.

Question Everything…Must be a condition of employment on your team

These two words must be a condition of employment on your team. Always question the way business is done to find a better way to function. Never allow yourself or your team members to become one of the gorillas that do not understand the reasoning behind actions and just do things because that is the way it has always been done! Remember, Yesterday Is Interesting But Irrelevant means that, although we learn from past experiences and events, we must always look for new ways of doing old tasks to truly embrace and enable positive change.

How do you lead positive change? Let’s keep the conversation going and learn from each other. I look forward to your comments below.