Tripod of Success Series: Legacy From a Third-Grader 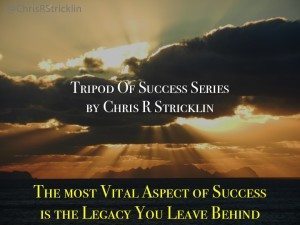 Myrtice Smith was born in 1932. After completing third-grade, she quit school to work on the family farm and help care for her brothers and sisters during one of the most trying times in our nation’s history. By every stretch of the imagination, this was not the proper start to a successful life.

Myrtice Smith was my grandmother, whom I called Nanny. She was a hard worker. She ran a gas station then a restaurant all while working the farm to grow vegetables and raise animals to feed her family. Regardless of how tired she was after a long day, she always reminded me to set my goals high. As we sat around the dinner table each night, she would ask me what I wanted to be when I grew up and push me harder than I could have pushed myself.

Fast forward to one month after I graduated college and married my high school sweetheart. I can still see her standing beside her house staring at our car packed for the road trip to our first Air Force duty location. With tears in her eyes, she hugged my neck and said, “Here is your chance to be more than we ever were…let’s see what you can do with it!” I climbed in the car and began the 13 hour drive wondering exactly what she meant by this statement.

Fast-forward again, now to the birth of my first child. Nanny looked at me with the same definitive look as that day years back at her house when my wife and I began the road trip of our life. She now opined that success in her life was defined by mine, and that of her other children and grandchildren. With clarity like I have never experienced before, she said, “the most vital aspect of success is found in your legacy. If your children have a better life, however you personally define that, then you lived a life with successful legacy.”

The most vital aspect of success is the Legacy you leave behind.

Throughout her 67 years, Nanny was the most giving and caring person I have ever known. It was through her caring nature I learned the most critical leg of the success tripod, how to define a successful legacy. This aspect extends beyond the nuclear family. As a leader, your success is found in those you mentor. Legacy is the final leg of the Tripod of Success.

Thanks for your time and devotion to self-improvement. Let’s keep the conversation going.