A Tribute To Veterans – Solemnly Remember 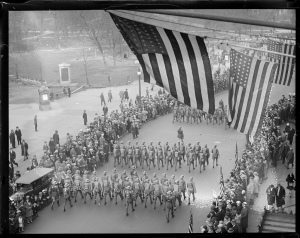 “…solemnly remember the sacrifices of all those who fought so valiantly on the seas, in the air, and on foreign shores, to preserve our heritage of freedom.”
President Dwight D. Eisenhower

On November 11, 1918–after more than four years of bloody fighting by over 70 million soldiers from as many as 100 countries, an armistice was signed in France between the Allies and Germany bringing World War I to a close. At the time, H.G. Wells coined the term “the war to end all wars,” referring to the conflict that left more than 9-million lives on the battlefield and countless others forever changed. Unfortunately, Mr. Wells was overly optimistic in his phrase—with World War II starting only 21 years later involving many of the same actors. Sadly, to date, our country has seen 30 armed conflicts since the War of Independence, 14 of them since the end of World War I.

A year after the armistice was signed on the 11th hour, of the 11th day, of the 11th month in 1918; many allied nations commemorated the event with a national “Armistice Day” to celebrate the peace that followed World War I. It wasn’t until 1954; following World War II and the Korean War that Congress replaced “Armistice” with “Veterans,” amending the original Act to commemorate November 11 — a day in America when veterans of all wars are honored. President Eisenhower captured the tone of Veterans Day by proclaiming that we should “solemnly remember the sacrifices of all those who fought so valiantly on the seas, in the air, and on foreign shores, to preserve our heritage of freedom.” 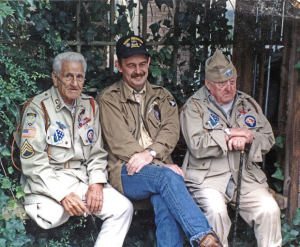 And so we find ourselves here — leagues across the ocean of time from the inception of this holiday — to take measure of where we are today. In his proclamation, President Eisenhower challenged us “reconsecrate ourselves to the task of promoting an enduring peace so that their efforts shall not have been in vain?” Ask yourself what you have done — better yet, what you will do — to actively participate in preserving this legacy and answering this call?

“Support our troops!” You’ve seen it plastered to the back of a car on a yellow-ribbon magnetic sticker, and you’ve heard it spoken by leaders, activists, politicians and citizens throughout our society…sometimes with the best of intentions…sometimes with self-interest. Regardless of the intentions, however, the phrase has become ubiquitous in its popularity, cache in its use and often merely an opportunity for the speaker to endear themselves with the audience.

So it goes with other phrases that are stated often, yet have the tendency to lose their muscle if the person who delivers the phrase waters it down with a lack of supporting action. “See you soon!” “I’ll call you…” “How’s it going?” … “I Love You…” Just as the phrase, “war to end all wars” came to be so overused that it eventually became disparaging, so it goes with “Support our troops.

I submit to you that we are surrounded with opportunities in our community to support our troops and veterans. In small towns across America, you’ll find veterans of World War II, Korea, Vietnam, Desert Storm, Panama, Corsica, Beirut, Iraq and Afghanistan. You may not have noticed them, but you can easily find them in various places–walking down the street, drinking a cup of coffee at work, at your kitchen table, in the cemetery…in your family. Despite their varied backgrounds of service, function, conflict, and age they all have one thing in common: they have a story they want to share with you. You can support your troops by taking the time to say hello–to say “thank you”–and to listen to their story. And you can continue to support them by drawing from this story an appreciation of why they felt it so important to put their lives on the line to ensure we had the opportunity to enjoy our American way of life. 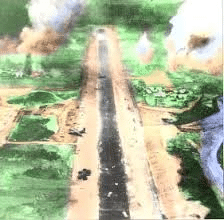 I attended a conference in 2010 and had the opportunity to share a drink with retired Air Force Col Joe Jackson, who was awarded the Medal of Honor in Vietnam for piloting a C-123 into an area where few people would be crazy enough to fly. He volunteered to rescue 3 forward combat controllers from a forward outpost in camp Kham Duc that had been overrun. In horrible weather, and under extremely intense fire, he put his plane down on the only usable bit of runway that was left and got those men onboard. As you are aware, getting there was only half of the battle–he then had to turn the aircraft around and get that plane back into the air–although not until a rocket landed on, but miraculously failed to explode, at the nose of his plane. Under extreme attack and direct fire, he somehow danced that overloaded plane back into the air over potholes and bullet-holes to safety. 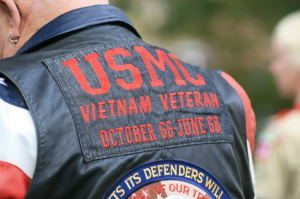 If you had been able to take the time to listen to the 87-year old man tell that story for what has to be the ten-thousandth time to an eager listener, you’ll notice that his eyes still gloss over with the pain, fear, courage and triumph he experienced that day back in 1968. He’ll tell you he’s no hero–he only did what he felt had to be done. It had to be done, in his words, because every small step mattered in the big picture. Perseverance, not courage, was the pearl of wisdom to be gained through that story.

Friends, I will close by saying you are surrounded by heroes in your community; not just on Veterans Day, but every day. Look around your community–see their proud faces. Take the time–listen to their stories. Support your troops–by finding the lesson of their stories and applying it in your daily American life. Through this, we can honor their sacrifice and hold true to our pledge to “Support The Troops.”

Matthew T. Fritz is a leader and mentor in the field of complex organizational change, emotional intelligence, and organization strategy. A successful DoD senior-acquisition program manager and test leader, Matt has earned documented success in the areas of test and evaluation, assessment, technology development and flight operations. He has specialized experience in cost, schedule and performance management and is an active duty Field-Grade Officer with command-experience in the United States Air Force. Matt is also a certified acquisition professional, as well as a certified Emotional Intelligence Trainer/Practitioner. He is the Author of an instructional book entitled, “Leveraging Your LinkedIn Profile for Success” and actively blogs with other military leaders at GeneralLeadership.com, as well as his personal blog at AdvancedVectors.com.
Tags: 11 Nov, Armistace Day, fritz, holiday, Nov 11, November, standard, Support Our Troops, Thank You, Veteran's Day, Veterans