Dynamic Dozen: Step Up and Step Out

“I may not have been the best combat commander, but I always strove to be. My men depended on me to carefully analyze every tactical situation, to maximize the resources that I had at my disposal, to think under pressure, and then to lead them by personal example.” -Dick Winters (1/506 Airborne Infantry Regiment, WWII) 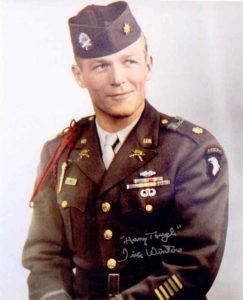 The colonel looked at four squadron commanders and said, “The general will be inspecting the facility tomorrow, everything needs to be perfect.” Three of the assembled commanders looked at their feet, while the fourth simply smiled and said, “Sir, I got this. Leave it to us and we’ll take care of it.” In this particular case, it wasn’t even in that squadron commander’s assigned mission set, but as he said later, “It’s no sweat, Sir. The job needed to be done and I knew we could do it.” That sort of “can-do” attitude is the essence of this month’s Dynamic Dozen post: leaders seek out responsibility.

Look for Opportunities to Lead

People drawn to leadership roles are usually given the mantle of leadership because they seek out responsibility. Perhaps they believe they have a better idea, or are uniquely qualified to solve a problem, or are the one who cares for the people in their charge the most. Whatever the reason, the kind of person who seeks responsibility is the same kind of person who wants to lead. It’s the attitude that drives entrepreneurs, and it’s the attitude that enables people to effect change in large organizations.

Rewarding “can-do” behavior is important for leaders at all levels. We want to encourage others to grow and we want to ensure we’re not the only ones thinking and acting on the team. If a leader makes himself a single point of failure, the results will be predictably bad. Only by setting the example of seeking out responsibility, and encouraging that same skill in those we lead, can we expect our teams to excel in the face of adversity. Believe me, whether you’re facing bullets or board rooms you want to be part of a team with the same “can do” ethic as you have if you expect to come out on top!

One of the best ways to seek out responsibility, and be successful in the process, is to work your boss’ boss’ priorities. Your boss is trying to be responsive her boss’ priorities; by figuratively putting yourself in your boss’ place you can more clearly see what you need to be doing. Taking your boss’ view of things is important because it enables you to understand where she’s trying to take the unit and what might be influencing her thoughts, and because it helps you grow as a leader. You’ll never be in all the meetings your boss is in, but striving to understand the environment helps you translate your boss’ instructions to your team much better. This principle is the reason military leaders spend so much time on commander’s intent. If tactical leaders understand the strategic environment, they’ll be able to make independent decisions congruent with the overall goals.

There is, of course, a wholly selfish reason to work your boss’ boss’ priorities: it makes them look good and a happy boss makes for a happy workplace. I remember the sage advice from a senior Chief Master Sergeant when I became frustrated over the direction my commander gave me, “Sir, the pay’s the same!” What he was telling me–albeit a bit tongue in cheek–is that the commander was in charge and I wasn’t. He wasn’t asking me to violate the law or my conscience, my commander had merely issued an unpopular order. The lesson is: unless someone asks us to do something illegal or immoral, then our job as leaders is to execute as if the idea were our own. More than once I learned later there were things were not as I believed them to be, and that “stupid” direction to do something wasn’t so “stupid” after all!

Seek out responsibility and work your boss’ boss’ priorities–sure ways to succeed as a leader!