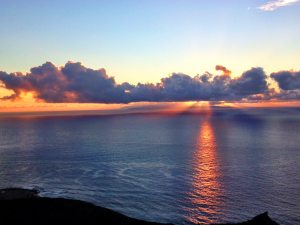 From the time we’re very young we’re presented with a list of “don’ts” to set boundaries. To be sure young people get the lion’s’ share of the boundary setting, but every society and organization has its list of what you can’t do. Boundaries are necessary, but a leader’s job is to inspire people to group and individual achievement so the job can’t end at “don’t.” We have to be able to articulate a positive view of where we want our teammates and followers to be. If we don’t then we’re not leading anyone anywhere in particular we’re just screaming out “row!” without telling them where they’re rowing.

In my time as a commander and leader in the Air Force, I found it necessary and even profitable to articulate this vision of who I wanted my Airmen to be as a companion to the boundaries we established to guide their behavior. That’s where the “Five Be’s” comes in: its who I want to be, and who I want the people around me to be. It’s a positive vision for a person to “Aim High” so they can reach their goals and be “all they can be” in their work and their life.

The “Five Be’s” are: Be Proud of Who You Are, Be Free, Be Virtuous, Be Balanced, Be Courageous

Be Proud of Who You Are

As a commander I used to remind my Airmen they were part of the mightiest military force on the planet: the US Air Force. They could be justly proud of their contribution to keeping America safe, and for what they contribute to the joint team. Similarly, leaders should instill pride in their teams for the work they’re doing, whether that’s in business or the public sector. Leaders must remind employees they’re work is important: because it’s noble and selfless, because it’s providing an important service, or because it’s putting food on the table–whatever the reason–the boss must give people a reason to come to work beyond “I said so.” A sense of mission goes a long way to making the team cohesive and productive.

But organizational pride only goes so far, and leaders must help individuals cultivate their own sense of self-worth. Everyone has something in their past or upbringing to be proud of; help them see it. It could be their sense of belonging to their family, or accomplishments in sports or business, or as an expert in their field; whatever the reason, remind them to be proud of who they are. The more people see themselves as valuable, and the more they are treated as valuable, the stronger the team. A chain is only as strong as the weakest link, so a chain made of very strong links is a tough one!

There is an idea popular in 21st century society that “freedom” means “doing whatever I please.” That’s not freedom, it’s “license.” Authentic freedom is being able to choose those things that make you and those around you better, that improve your community as well as yourself. It doesn’t mean there are no limits, it does mean leaders place limits on our teams and ourselves to keep them/us healthy and productive.

The metaphor I use often to describe this idea is how gravity works. Because of the “Law of Gravity” I am free to move about the Earth confident I understand the “rules” and without flying off into space. I might “escape” Earth’s gravity to get into orbit, but that smooth arc I travel through space is because of gravity. I can even use gravity to “slingshot” my spacecraft to faster speeds around the solar system! However, without gravity I would be unable to move or travel: I’d simply be flung off the Earth and into space moving in a straight line until I ran into something else. I’m free because I’m “bound” by gravity!

So it is in the personal realm. If I am surrendering my energy to something that prevents me from achieving my goals, or something that makes me unhealthy physically or emotionally, then I’m not free–even if I am freely choosing the thing that is bad for me. Leaders have to create an environment where choosing the good is encouraged and even celebrated. Being free personally, and maintaining an environment where others can also be free, is a prerequisite to have a healthy and productive team.

I hope I shall possess firmness and virtue enough to maintain what I consider the most enviable of all titles, the character of an honest man. -George Washington

Modern society has distanced itself from the Classical Ideal of virtue, but the ancient Classical Cardinal Virtues are as important today as they ever were. I maintain keeping to the virtues of: Prudence (using good judgement), Justice (being fair), Restraint (not overdoing it), and Fortitude (strength to endure trials gracefully) is particularly important for leaders to both model and cultivate.

When the honesty and virtue of their co-workers are a given, people’s minds and hearts are free to think bigger thoughts. Put another way, when each person expects the leader and their teammates to treat each other honorably they can commit more fully to the team’s mission. Moreover, and more to the point, striving to live a virtuous life is both good for us as leaders and good for us as people. When people strive for what’s good for them, they are then healthy in mind and spirit and able to contribute more fruitfully to whatever their organization has for them to do, to their community, and to their family.

In my experience, the most effective leaders were the most balanced. They made time for work, family, mind, and body; the results I observed were people with seemingly endless stores of energy and high achievement. They were disciplined and focused, and kept their priorities in what I believe are the right order. In a world where sometimes the sole measure of merit is the number of hours worked and the bottom line, it’s refreshing to know leaders who prioritize all sides of their personality rather than sacrificing their families or health on the altar of success. In the military we have a saying, “everyone gets a pink slip eventually” which means although many serve for decades, at some point we have to hang the uniform up and return to civilian life. Our personal lives and families don’t get a “pink slip”–we’re in those our entire lives–so maintaining a healthy balance is crucial to arriving at retirement as an intact person. I think that same metaphor can be extended to all walks of life: no matter what your profession or business, at the end you have your personal health and the affection of those around you. A truly successful leader finds a way to achieve the results they seek while still striving to be “all they can be.”

Of the two types of courage, physical and moral courage, moral courage is usually in the shortest supply. Risk taking comes with the leadership territory. Decisions leaders make can have far reaching effects on the organization and the people in it, so there’s often immense pressure on leaders to get it right. Unfortunately, the pressure to get to the right answer leads some to make no decisions. In organizations with “paralysis by analysis,” leaders who have the moral courage to take risks and make decisions can take a struggling organization and make them a high achieving one.

Courage to make decisions is only part of the equation, however. As leaders, we have to do our make the right decisions, especially in situations where ethics are involved. Do we do the inspection or merely sign off on the form? Are we truthful with clients and teammates about our limitations or do we say anything to get the sale? In the end, half-truths and half-done tasks harm us more than they harm others. Leaders have to set the example and do what’s right; not merely because “everyone is looking”, but to be sure we don’t mortgage our own soul to get a sale. Having moral courage is good for everyone, but it’s also good for each of us.

So those are the “Five Be’s”…Proud, Free, Virtuous, Balanced, Courageous. It’s a positive vision of the sort of person I want to model, and the sort of people I want around me. Who do you want to be?

Action Steps:
1. What is one thing holding you back from being “all that you can be?”
2. What opportunities do you have to lead with courage?