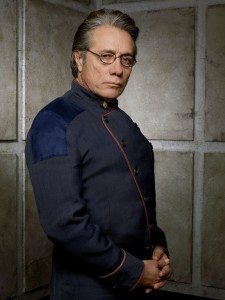 Studying fictional leaders is sometimes as profitable as studying actual ones. For example, Commander William Adama (Edward James Olmos) in the SyFy TV series Battlestar Galactica is a great character study in leadership during crisis. I’m a big BSG fan, and consider it one of the best sci-fi TV series ever made. The quote above is from the end of the pilot, after the Cylons have destroyed the entire human race except for 50,000 survivors. The last Colonial warship, the Battlestar Galactica must lead a ragtag fleet of survivors, and the fleet’s leaders must find a way to keep humanity’s last remnants alive and moving toward a goal. That goal is the “Thirteeth Tribe of Man” located on the legendary planet of “Earth.” As a sci-fi nerd and a movie fan, I often see parallels between the story lines of my favorite movies and real life. So it was that as our Air Force embarked on a very signficant re-organization I find myself reflecting on Commander Adama. You see, I’m leading a group of people to a (figurative) new “land” and leaving behind much of “the old ways” to learn new ones. Not to be melodramatic, surely no Cylons are chasing us through space, but we are now leading our Airmen through some very significant change.

So it is with any organizational change, not just ours. There are volumes on Change Management in the local bookstore, but I like to distill the fundamentals of leading change into three main “lines of operation”: 1) Visioning the Destination, 2) Communicating the Destination, and 3) Leading People to Earth. By the way, these “lines of operation” can also apply to personal change!

As we’ve written here many times, leaders must begin with the destination in mind. Random change happens without leaders, but leaders with a vision focus the energy of the change into a positive force for the organization and the team members alike. Organizational paralysis and fragmentation occurs quickly if everyone visions their own destination because each will simply chart their own way. No team, institution, or organization can survive very long in that mode. Just as the civilian ships of the fleet needed the Galactica (and Adama) to lead them (and needed to stick together through the journey) so teams need a leader with a vision to take charge during turbulence.

It wasn’t enough for Commander Adama to “know” Earth’s location; he had to communicate that vision to the fleet. (Note to fellow BSG fans: I know he didn’t actually know…). It’s the same for leaders when charting a course through change. Leaders have to communicate and describe the destination, help the team see what’s possible and that the “organizational thrash” will end. Adama gave the fleet hope with a vision of Earth; every leader must do the same in their own circumstances.

Finally, leaders must actually get the team to the destination, to “find Earth” metaphorically. It’s easy to give speeches, but splendid speeches and colorful posters are not leadership. Leading people to a destination is leadership. Leaders won’t be able to start the journey without both having and communicating that vision. That said, if leaders spend all their time “visioning” or planning but never “launching,” no one will get anywhere. Actually leading through the change is the hardest part of leading change! Adama’s speech on the hangar deck of Galactica was only the start, he had to chart the destination then move out.

So for all you leaders out there leading through change big and small: do your planning with care and foresight, communicate the destination, and go find Earth!

So say we all!

Action Steps:
1. In one or two sentences, write down a description of your personal or organizational destination.
2. Make a communication plan to help your teammates “see” the destination.
3. Make a Plan of Action & Milestones to chart your course to “Earth.”

Let me know how you are doing by continuing the conversation on Twitter @GenLeadBlog and @mickeyaddison, with hashtag #GeneralLeadership